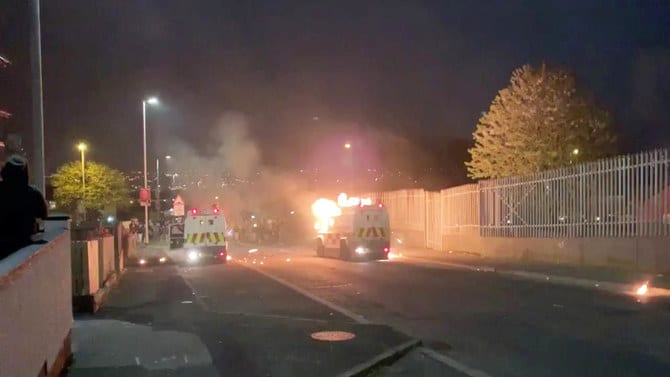 Police have blamed a group called the New IRA for the flare-up in violence in recent months.

Riots broke out in Northern Ireland last night and a woman has been shot dead in the city of Londonderry.

The killing is being treated as a terrorist incident, police said Friday, following the latest upsurge in violence to shake the troubled region.

Although the woman had yet to be formally identified, several reporters named her as Lyra McKee, a journalist, who had earlier posted an image that appeared to be from the riots in the city, also known as Derry, accompanied by the words “Derry tonight. Absolute madness.”

Although the police have not confirmed it does not appear as if the journalist was targeted.

Images of the unrest posted on social media showed a car and van ablaze and hooded individuals throwing petrol bombs and fireworks at police vehicles.

Petrol bombs were also thrown at police Land Rovers. A gunman turned around the corner and fired shots indiscriminately towards police vehicles.

Assistant Chief Constable Mark Hamilton said the police were “treating the shooting as a terrorist incident” and a murder inquiry had been launched.

There are reports that the trouble broke out after police raids on houses in the Mulroy Park and Galliagh areas.

Assistant Chief Constable Mark Hamilton said in a statement on Twitter “Sadly I can confirm that following shots being fired tonight in Creggan, a 29-year-old woman has been killed.”

It was not immediately clear who had fired the shots that killed the woman, but a leading Republican politician blamed “so-called dissidents”.

A car-bombing and the hijacking of two vans in Londonderry earlier this year were also blamed on a dissident paramilitary group.

The violence came in the run-up to the Easter weekend when Republicans opposed to the British presence in Northern Ireland mark the anniversary of a 1916 uprising against British rule.

The Good Friday Agreement in 1998 largely brought an end to three decades of sectarian bloodshed in Northern Ireland between republican and unionist paramilitaries, as well as British armed forces, in a period known as “the Troubles”.

Some 3,500 people were killed in the conflict — many at the hands of the Irish Republican Army (IRA).

Police have blamed a group called the New IRA for the flare-up in violence in recent months.