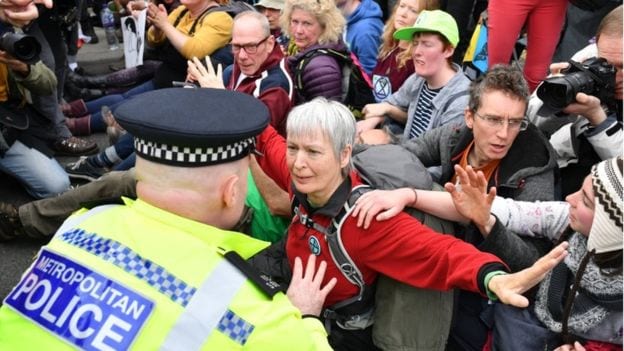 Police have arrested more than 250 people in central London as climate protesters brought parts of the UK capital to a standstill for a second day running.

Climate change organisers said protests had been held in more than 80 cities across 33 countries.

In London, motorists faced gridlocked traffic on a number of alternative routes, such as Westminster Bridge and Blackfriars Bridge.

Transport for London warned bus users that routes would remain on diversion or terminate early.

Mayor of London Sadiq Khan said although he “shared the passion” of the activists, he was “extremely concerned” about plans some had to disrupt the Tube on Wednesday.

“Ongoing demonstrations are causing serious disruption to public transport, local businesses and Londoners who wish to go about their daily business,” Ch Supt Colin Wingrove, of the Met, said.

Extinction Rebellion generated headlines earlier this month when protesters stripped off in the House of Commons public gallery, putting their backsides against the glass and prompting outrage from some MPs.

The group is demanding the government declare a climate and ecological emergency and reduce greenhouse gas emissions to net zero by 2025.

On Monday tents littered the roads at Oxford Circus with some activists huddled beneath a pink boat with the words “Tell the Truth” across its side. One placard read: “Rebel for Life”.

Police said five of those arrested had been detained after the Shell building near the River Thames was targeted with graffiti aimed at Shell the petroleum company.

Two protesters scaled up scaffolding writing ‘Shell Knows!’ in red paint on the front of the building and three protesters glued their hands to the revolving doors at the entrance.