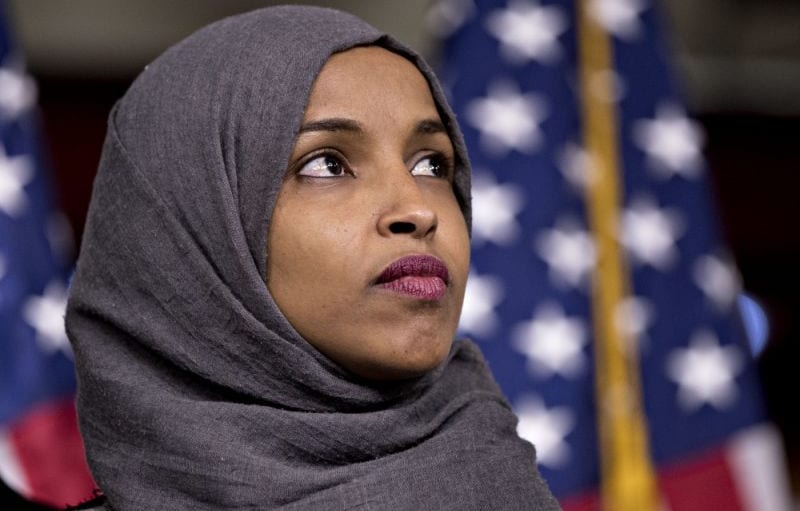 Democratic Congresswomen. Ilhan Omar has said that President Donald Trump’s recent tweet, featuring a video of her speaking over footage from 9/11, has caused a surge in death threats against her.

Minnesota’s Ilhan Omar said the threats were sparked by “violent rhetoric”, accusing Mr Trump of stoking right-wing extremism. “It has to stop,” she added.

Ilhan Omar is one of only two Muslim women ever elected to Congress and has seen a fair share of hate and Islamaphobia.

Omar has become one of the most well known and controversial new members of the Democratic Party, largely over her criticism of Israel and its relationship to the U.S.

On Sunday night she tweeted that violent crimes by right-wing extremists and white nationalists were on the rise, both in the U.S. and around the world and being encouraged by the United States President Donald Trump.

Earlier this month, the FBI arrested a man who allegedly called Omar’s office and threatened to shoot her in the head.

President Trump immediately responded with a tweet of his own, highlighting the words ‘HATE’ to emphasise the rhetoric targeted towards Ilhan Omar.

Before Nancy, who has lost all control of Congress and is getting nothing done, decides to defend her leader, Rep. Omar, she should look at the anti-Semitic, anti-Israel and ungrateful U.S. HATE statements Omar has made. She is out of control, except for her control of Nancy!

This all started when President Trump tweeted on Friday afternoon that “WE WILL NEVER FORGET” alongside a 43-second edited video showing footage of the 11 September 2001 terrorist attacks, interspersed with a speech by Ms Omar.

“Some people did something,” she is seen saying, in between footage of planes hitting the World Trade Center, damage to the Pentagon and people fleeing buildings.

Democrats claimed the video does not provide context to Ms Omar’s 20-minute speech to the Council on American-Islamic Relations (Cair) on 23 March.

She was discussing civil rights for Muslim Americans in the wake of the 9/11 attacks.

Ilhan Omar said that Cair, the Council on American-Islamic Relations, was founded “because they recognised that some people did something and that all of us were starting to lose access to our civil liberties”.

Republican critics, triggered by Trump, said that her comment “some people did something” was offensive to the nearly 3,000 Americans killed in the attacks.

We are all Americans. This is endangering lives. It has to stop. pic.twitter.com/gwB2kDUIRp

But The Speaker of the House Nancy Pelosi waited overnight to condemn Trump’s video and also for failing to mention Omar by name.

“The memory of 9/11 is sacred ground, and any discussion of it must be done with reverence. The president shouldn’t use the painful images of 9/11 for a political attack,” Pelosi tweeted Saturday morning. And then on Sunday, she tweeted,

.@realDonaldTrump’s dangerous video must be taken down. I have spoken with the Sergeant-at-Arms to ensure that Capitol Police are conducting a security assessment to safeguard Rep. @Ilhan Omar, her family & her staff. They will continue to monitor & address the threats she faces. pic.twitter.com/Grb9c8S18d

“President Trump must take down his disrespectful and dangerous video,” she said, adding that security officials are reviewing Ms Omar’s protection and “will continue to monitor and address the threats she faces”

The president’s son Donald Trump Jr. also commented with a string of tweets attacking Omar, and he endorsed a racist, Islamophobic conspiracy theory that linked the congresswoman to terrorism.