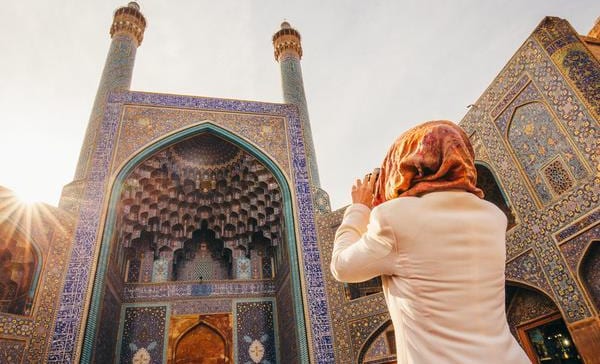 I am off to Algeria next year and have decided to invite a group of women to come and share my adventure through the Atlas Mountains, down to the breath-taking coastal towns and cities and into the dramatic Saharan landscape with bags of shopping in the local casbahs thrown in.

Naturally, there’s been a great response about the all-women trip but the issue of a mahram has cropped up several times. A mahram for those of you who aren’t familiar with the term is a bloke who can act as a legal escort during journeys lasting longer than a day and night.

The concept of the mahram was introduced in the early days of Islam although I believe other faiths also adopt a similar practice. It comes from a period of time when it was simply not safe to travel but today it is used as a means of control by the patriarchy!

While my group will be avoiding dodgy areas near Mali, Libyan and Niger borders in the Sahara, the rest of Algeria is perfectly safe in my humble opinion – a lot safer, say, than London where knife crime is out of control or Chicago where gun-toting robbers proliferate.

So when I say I’m organising a women-only tour that’s exactly what I’m doing – having said that I am looking for a female coach driver at the moment so if there are any Algerian ladies reading this who hold a licence back home please get in touch!

Oh, and to those men who are so concerned that we women are daring to venture out without a mahram, why don’t you go to Syria where 7000 females of all ages are being held in the Assad regimes prisons where they are being routinely tortured and abused. Do something really useful and go and help them.

Just when you thought the Brexit madness couldn’t get any worse, Nigel Farage launches a new political party but the good news is, it will signal the end of UKIP, reckons Yvonne Ridley

Talking of the patriarchy as I predicted Ex-UKIP godfather Nigel Farage has launched a new political party he says will create a “democratic revolution.” in UK politics.

I very much doubt the Brexit Party will do that. I fear it will just spawn another mass of angry white men who we saw took to the streets in Westminster recently to harangue anyone who didn’t agree with them.

So, just when you think things couldn’t get worse, they most certainly have. I’m going to find Brenda of Bristol and hide in her bunker away from this circus.

I’m a huge fan of grime artist Stormzy, a man with a social conscience and bags of talent too. He should’ve headlined in Austria’ Snowbombing festival on Thursday night but dramatically pulled out after some members of his team had been racially profiled.

In an Instagram story, the rapper said his team were targeted while security were looking for a weapon. To make a point about racism and racial profiling he quit the gig accusing security of being aggressive while searching for a weapon. None was found and the gig organisers apologised but it was too late.

Sorry for Stormzy’s fans who missed out but it’s a High 5 from me to him for being so principled.

Laughing till the end

Veteran stand-up comedian Ian Cognito died on-stage during a performance. Many of the crowd at The Attic bar in Bicester thought it was all part of the sixty-year-old’s comedy routine as he sat down on a chair and fell silent. He remained there for five minutes as the audience continued laughing before anyone realised he was dead.

One said: “We just sat there for five minutes watching him, laughing at him.” It was, no doubt a tragic way to go, but having said that, as Jimmy Carr wryly remarked in a Tweet, Cognito “died with his boots on. That’s commitment to comedy.”

Why we are all superstars

Scientists got into a real spin as the first ever picture of a black hole was put out by NASA’s Chandra X-ray Observatory. Admittedly I struggled to be impressed by the elliptical galaxy Messier 87 which is several billion times greater than that of Earth’s sun.  But it did prompt me to recall the words of late astronomer Carl Sagan: “The nitrogen in our DNA, the calcium in our teeth, the iron in our blood, the carbon in our apple pies were made in the interiors of collapsing stars. We are made of starstuff.”

So one of the world’s longest-serving leaders has been ousted in a coup and few will shed tears for outgoing President Omar al-Bashir.

However, these are exciting times in Sudan and I truly believe that the role played by women was one which tipped the scales in favour of this revolution succeeding.