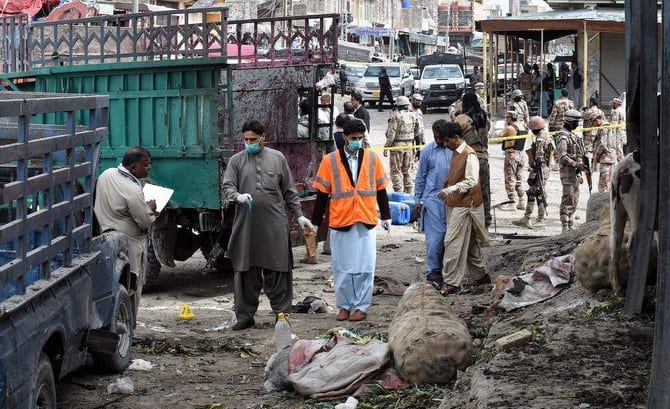 A suicide bomber targeted an open-air market in the southwestern Pakistani city of Quetta on Friday, killing at least 20 people and wounding dozens of others, police and hospital officials said.

Shortly after the bombing, struck near a Shiite residential area, dozens of angry Shiite youths rallied in Quetta, demanding more security from the authorities and the arrest of those behind the attacks.

They also denounced the violence by Sunni extremists who have killed hundreds in similar attacks over the past years in Baluchistan province, where Quetta is the capital.

DIG Quetta Abdul Razzaq Cheema told the media that the blast, which shook the Hazarganji sabzi mandi at around 7:35am, was caused by an improvised explosive device (IED) that had been hidden among vegetables in the market.

Balochistan Minister for Home Mir Zia Ullah Langau said in a press conference later that initial investigation suggested it was a suicide bombing, and that it did not target any particular community.

He vowed that justice would be delivered and the perpetrators would be taken to their logical conclusion.

According to the BBC, last week, the Pakistan foreign minister Shah Mehmood Qureshi said that ‘Pakistan had credible intelligence that India was planning another attack in Pakistan very soon.’

He did not elaborate on the type of attack India was about to launch but did suggest nothing was beyond India’s guile.

Several militant groups operate in Balochistan, which is also the scene of a low-level insurgency by separatists. The region also highest the highest influx of South Asian workers.

Prime Minister Imran Khan condemned the blast in Hazarganji and summoned a report on the incident.

The premier expressed his grief at the loss of innocent lives and directed the authorities to ensure the best medical treatment for the injured.

“Deeply saddened & have strongly condemned the terrorist attack in Hazarganji market area of Quetta targeting our innocent people. I have asked for an immediate inquiry & increased security for the ppl. Prayers go to the families of the victims & for early recovery of the injured,” PM Imran tweeted.

Quetta is the provincial capital of Balochistan, an industrial city which is habitat to many Pakistanis who come to work in the region. It is located by the border of Afghanistan in the south.

It is one of the most resource-rich areas of Pakistan but at the same time is one of the most deprived when compared to Punjab. Over the last few years, local reports and journalists have suggested that Indian backed propaganda is pushing Balochistan for independence.

The border at Balochistan is the least difficult one for anyone to migrate across. Although officials in Pakistan suggest this is not true, locals living in Baloch suggest getting across the border is easy and can be done daily if they want.

According to Pakistani media reports, the border is used to smuggle arms and militia into Pakistan by extremists.

India has been investing heavily in Pakistan. Strategically it is able to control the east and western borders of Pakistan. The investment in infrastructure has developed a stronghold in Afghanistani politics and is using the tensions between Afghanistan and Pakistan over the war on Terrorism and exploiting them.

Opposition leader in the National Assembly Shahbaz Sharif prayed for the departed souls and expressed condolences to the grieving families of the victims. He said the nation and its institutions have rendered great sacrifices to eliminate terrorism from the soil.