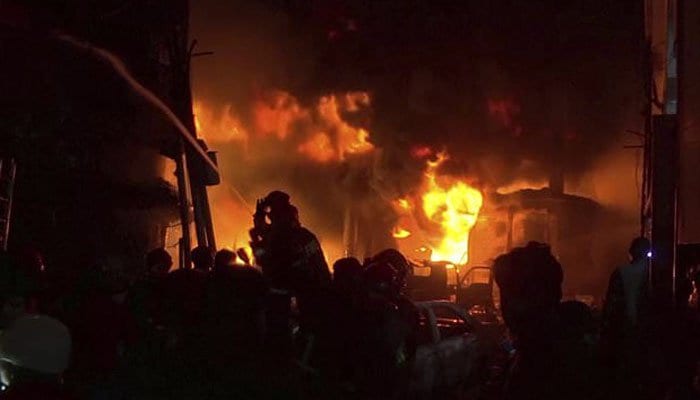 A huge blazing fire in a Dhaka office block has killed at least 20 people, with desperate workers leaping to their deaths in the latest major incident to hit the Bangladeshi capital.

The death toll may continue to rise as rescue crews search the torched building.

People were seen screaming for help from windows, while some lowered themselves down the side of the building, others just simply jumped with local media reports saying at least six people had been seen leaping from flaming windows.

A military spokesman, Abdullah Ibne Zaid, said the body of a Sri Lankan man was brought to the army’s Kurmitola Hospital and another 45 people were being treated there.

Helicopters dropped water on the blaze as flames and thick black smoke poured out of the windows.

Hundreds of firefighters were joined by the navy and air force specialists, to try and gain control over this blaze.

A local Bangladeshi was a lucky survivor “When I heard a fire broke out in the building, I quickly rushed out of the building,” he told AFP.

“Many of my colleagues are still trapped in the office.”

There was no official word on how many people were trapped inside.