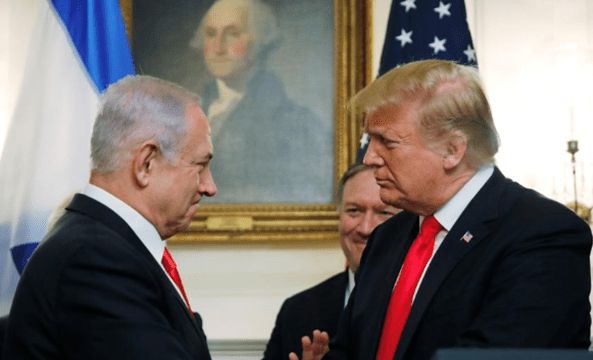 Syria reacted swiftly to Trump’s proclamation, calling it a “blatant attack” on its sovereignty and territorial integrity and saying it had a right to reclaim the Golan.

Trump began proceedings when he signed a proclamation officially granting U.S. recognition of the Golan as Israeli territory, a dramatic shift from decades of U.S. policy.

The move, which Trump announced in a tweet last Thursday, appeared to be the most overt gesture by the Republican president to help Netanyahu, who had been pressing Trump for the move since February 2017.

It has been suggested this alliance to ensure both Netanyahu and Trump get election again in their respective campaigns, with some unofficial and unsubstantiated claims a new hotel deal is on the cards for the Trump empire.

Netanyahu, who faces an election on April 9, earlier on Monday said he was cutting short his U.S. visit after a rocket fired from the Gaza Strip, blamed on Hamas, wounded seven people near Tel Aviv. Israel launched retaliatory air strikes in Gaza.

Israel’s prime minister arrived in Washington on Sunday, originally for a four-day trip.

His chief rival for the premiership, Benny Gantz, also visited the U.S. capital, telling a major pro-Israel lobbying organisation that he was the better alternative to lead the country.

In signing the proclamation, Trump said: “This was a long time in the making.” Referring to Jared Kushner, his son in laws initiative to secure agreements satisfactory to the future of Trump and Netanyahu.

He handed the pen that he used for his signature to Netanyahu, and said: “Give this to the people of Israel.” and smiled.

The prime minister welcomed Trump’s action and said Israel had never had a better friend.

Syria reacted swiftly to Trump’s proclamation, calling it a “blatant attack” on its sovereignty and territorial integrity and saying it had a right to reclaim the Golan.

A U.N. Security Council resolution adopted unanimously by the 15-member body in 1981 declared that Israel’s “decision to impose its laws, jurisdiction and administration in the occupied Syrian Golan Heights is null and void and without international legal effect.”