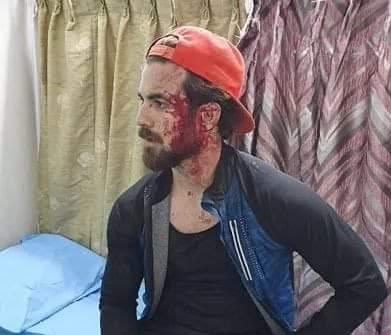 He was enjoying a cup of coffee at a nearby shop after training at the gym when an angry mob approached and dragged him out of the shop and beating him senseless. Absar Zahoor Dhar told the media he was not aware why he was suddenly attacked.

Five, people, he said, armed with iron rods and sticks dragged him out of the shop and started beating him. Dhar sustained injuries on his hand, head and face after the attack.

The young student, who funds his studies through modelling and social media influencing, said he now lives in fear, not knowing if he will be attacked again. He still can’t understand why he was being targeted but assumes it was for being a model and Muslim.

“The assailants are roaming freely in front of my house and I am not able to attend college as well”, he said.

Attacks on individuals with Kashmiri origins have increased following the killing of 44 Indian soldiers in Pulwama suicide blast.

Earlier this month, some Kashmiri vendors were thrashed by Indian right-wing extremist party members and it was only recently that a Muslim family in Gurgaon was attacked by a violent mob on Holi.

Three weeks ago a Hindu tribe attacked and evicted 200 Muslim homes in India, burning them to the ground in the process.

In London, Sikhs and Kashmiri Muslims were attacked by Hindu BJP supporters during a protest against the tyrannical rule of the BJP party in the region.

Police, have said they will investigate the matter however, they have immediately denied it had anything to do with the Pulwama attack.