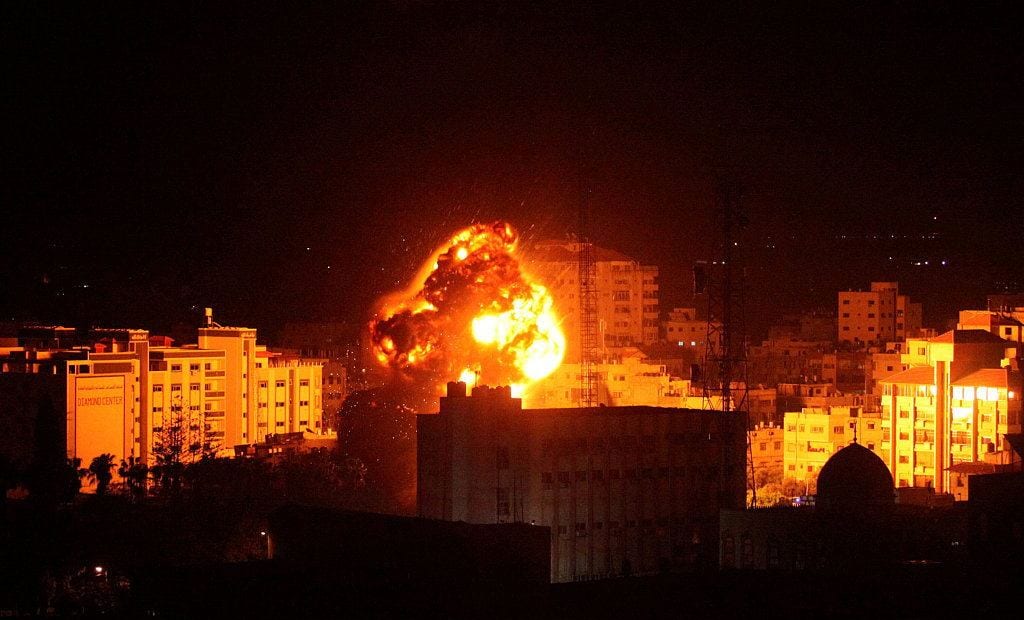 One Israeli strike destroyed a building in Gaza City that Israel alleged was a secret headquarters for Hamas security and intelligence.

Israeli air strikes hit sites across the Gaza Strip on Monday in retaliation for a rare long-distance rocket attack that struck a house near Tel Aviv.

The rocket from Gaza that hit a house in Israel early Monday was a rare long-distance strike and Israel’s army said it was fired by Hamas.

A Hamas official, speaking to AFP on condition of anonymity, denied the group was behind the rocket, evoking the possibility it was caused by “bad weather”.

The response from Israeli forces was immediate and massive. On Monday they struck targets across the Gaza Strip, including the offices of Hamas’ supreme leader, in response to a surprise rocket attack from the Palestinian territory, as the military bolstered its troops and rocket-defence systems in anticipation of a new round of heavy fighting with the Islamic militant group.

Israel, whose strikes began around the same time Prime Minister Benjamin Netanyahu met US President Donald Trump in Washington, has not commented on the claim.

One Israeli strike destroyed a building in Gaza City that Israel alleged was a secret headquarters for Hamas security and intelligence.

Residents of Gaza said the building was known to house the Hamas-linked Multasim insurance company.

Israel response was a quick blitz targetting the Gaza Strip. Hamas’s interior security office in Gaza City was also hit. In the process of these strikes, they destroyed several local businesses including a school of motoring and his and Associated press office.

Netanyahu is in a tight race for re-election, and just two weeks before the April 9 vote, faces tough criticism from challengers who accuse him of being too soft on Hamas.

In Washington to celebrate the U.S. recognition of Israel’s control of the Golan Heights, Netanyahu instead was forced to cut short his trip under heavy pressure to strike back at Hamas.

Earlier, Haniyeh issued a statement warning Israel against heavy retaliation. He said the Palestinian people “will not surrender” and its militant factions “will deter the enemy if it exceeds the red lines.”

Monday’s rocket attack followed another rare incident on March 14 in which two rockets were fired from Gaza towards Tel Aviv.

“Egyptian efforts succeeded with a ceasefire between the occupation and the resistance factions,” Hamas spokesperson Fawzi Barhoum said.

Further exchanges of fire occurred after the ceasefire announcement, but calm seemed to return by around midnight (2200 GMT).