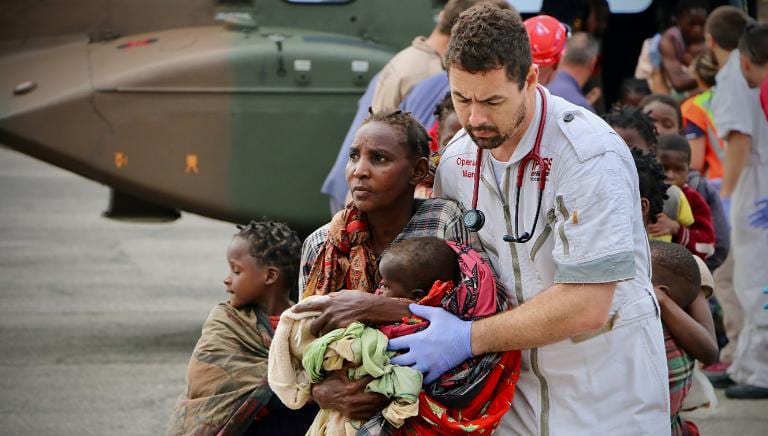 “I understand there are bodies which are floating, some have floated all the way to Mozambique,”

The death toll from cyclone Idia that devastated Mozambique and Zimbabwe has risen to more than 350. Rescuers are racing against the clock to help evacuate survivors from the region.

“We already have more than 200 dead, and nearly 350,000 people are at risk,” Mozambican President Filipe Nyusi announced, while the government in Zimbabwe said around 150 people had died but the toll could be triple that figure.

In Nhamatanda, Mozambique, some 60 kilometres (40 miles) northwest of Beira, 27-year-old Jose Batio and his wife and children survived by climbing onto a roof.

The city of Beira has a population of 530,000 and took the brunt of the cyclones force. 90% of the city has been devastated by cyclone Idia and four days later huge parts of it are still cut off from the rescuers who scrambling helicopters and boats to somehow to reach the trapped and wounded.

In Zimbabwe school students of St. Charles Luanga were rescued by members of the Zimbabwe Military, who were perched in trees moving to higher ground as the tropical cyclone Idai barrelled across the southern African nations with flash floods and ferocious winds.

Local government minister July Moyo said after a cabinet briefing “I understand there are bodies which are floating, some have floated all the way to Mozambique,”

The UN, meanwhile, said that one of the worst storms to hit southern Africa in decades had also unleashed a humanitarian crisis in Malawi, affecting nearly a million people and forcing more than 80,000 from their homes.

Four days after Tropical Cyclone Idai made landfall, emergency teams in central Mozambique fanned out in boats and helicopters, seeking to pluck survivors from roofs and treetops in an inland sea of floodwater, sometimes in the dead of night.

Air force personnel from Mozambique and South Africa were drafted in to fly rescue missions, while an NGO called Rescue South Africa said it had picked up 34 people since Friday night, using three helicopters.

The government declared a national emergency and ordered three days of national mourning. Some sources suggest the death toll will rise to over 1000 in the coming days and the displaced and affection region will impact almost 500,000 lives.

The storm swept away homes and bridges, devastating huge areas in what Defense Minister Perrance Shiri said: “resembles the aftermath of a full-scale war.”

Some roads were swallowed by massive sinkholes, while bridges were ripped to pieces by flash floods.

The UN World Food Programme (WFP) said it was mobilizing aid for some 600,000 people, saying the world did not yet appreciate the scale of the “massive disaster.”

So far, it has dispatched more than five tons of emergency provisions to the affected areas.