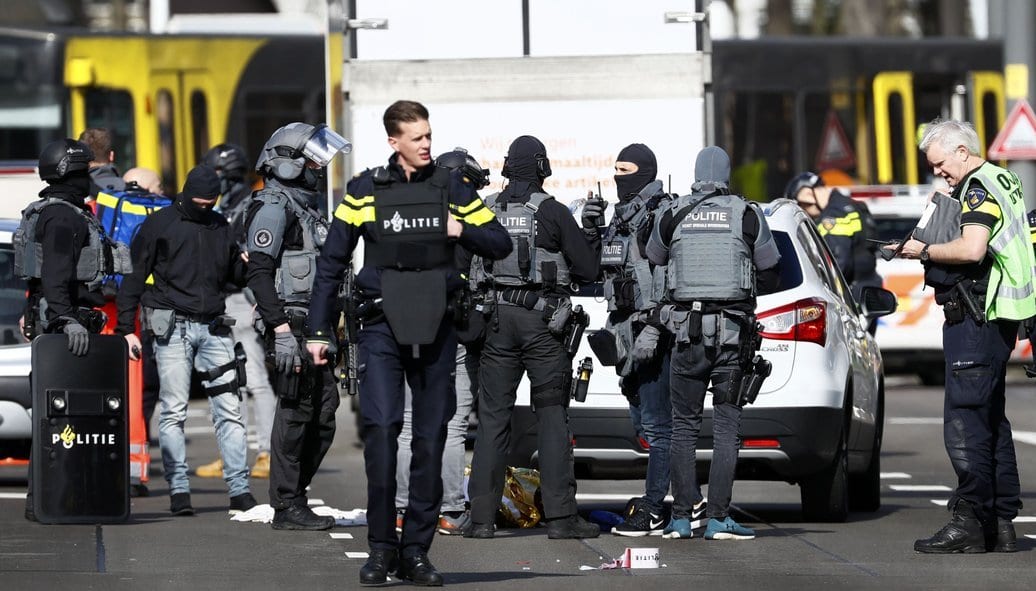 Dutch security forces were hunting for a 37-year-old Turkish man, allegedly suspected of having shot several people, one of them possibly fatally, on a tram in the city of Utrecht on Monday, in what authorities have already identified as a potential terrorist attack.

Authorities raised the terrorist threat to its highest level in Utrecht province, schools were told to shut their doors and paramilitary police increased security at airports and other vital infrastructure, and also at mosques.

EU President Claude Junker and the UK’s foreign secretary have joined others in expressing solidarity with the Netherlands following the mass shooting in Utrecht on Monday.

Hugely concerning news of a gunman opening fire on a tram in Utrecht, no doubt with innocent people just getting on with their day. We are in contact with Dutch authorities, urgently seeking further information. The UK stands with the people of the Netherlands

I have just spoken with @markrutte to get an update of the situation in #Utrecht. The #EU stands side by side with the #Netherlands and its people during these difficult times. My thoughts are with the wounded and their families.

Hours after the attack in Utrecht, police released the name and image of a man they want to find in connection with the shooting: Gökmen Tanis, 37, who was born in Turkey. Police warned anyone who sees Tanis not to approach him and to contact the police.

The Utrecht mayor Jan Van Zanen said in a tweet on Monday afternoon that three people were killed and nine others injured in the Utrecht tram shooting. Three of the nine individuals wounded are in serious condition.

Dutch Prime Minister Mark Rutte convened crisis talks, saying he was deeply concerned about the incident, which came three days after a Native Australian terrorist killed 50 people in mass shootings at two mosques in the city of Christchurch, New Zealand.

The Dutch authorities are treating this as a terrorist attack but full details about the motives of the shooter won’t be released until he is apprehended.

Earlier, the head of Dutch counter-terrorism said shots had been fired at several locations, without elaborating. Counter-terrorism units surrounded a house in Utrecht, Dutch television showed, but no one appeared to have been arrested.

“A lot is still unclear at this point and local authorities are working hard to establish all the facts. What we already know is that a culprit is at large,” Counter-Terrorism Agency head Pieter-Jaap Aalbersberg told a news conference.

Aalbersberg, who said the shooting “appears to be a terrorist attack”, declined to comment on the number of injured or on their condition and did not confirm any deaths.

A local broadcaster in Utrecht quoted a witness of the tram incident as saying he had seen a woman lying on the ground amid some kind of confrontation and several men running away from the scene. Some reports suggest this was an argument between a few that went wrong.

Utrecht, is the fourth largest city with a population of around 340,000, is known for its picturesque canals and large student population. Gun killings are rare in Utrecht, as elsewhere in the Netherlands.

My Tweets
We use cookies to help identify your computer so we can tailor your user experience, track shopping basket contents and remember where you are in the order process. WTX News Our Cookie Policy
Breaking News: 1 person killed in Terrorist Shooting in Holland
Has Imran Khan united Pakistan? Will Modi survive?
To Top
Weekly