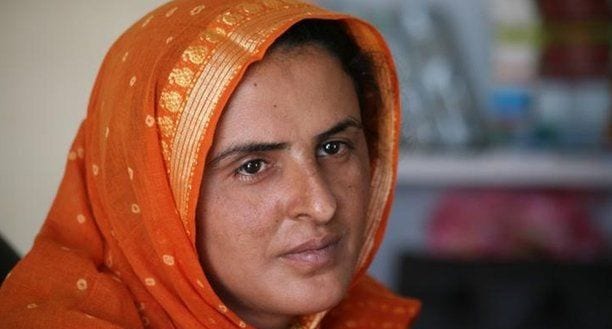 She tried to commit suicide twice after the incident because couldn’t go through with it because she didn’t feel as if she was getting the justice she deserved.

A Pakistani woman, living in Punjab, Pakistan was gang-raped on the orders of a village council as punishment for her brothers’ affair with ‘a woman of status’ has survived the ordeal and is seeking justice against her rapists.

Mukhtar Mai has continued her fight for justice taking her case to Pakistan’s supreme court to petition against the acquittal of the men convicted of the barbaric attack.

She tried to commit suicide twice after the incident because couldn’t go through with it because she didn’t feel as if she was getting the justice she deserved.

Rather than kill herself, which is almost expected after rape in Asain countries, she bore the abuse and denigration and swore that she would have justice.

She describes how she still remembers everything. It’s not something I can forget – it’ll always be a part of my life. It happened in 2002. I remember every single thing, even the time it happened.

I was sitting at my parent’s house, and they chose me to go and apologise for what my brother had done. I lament that they chose me, but I didn’t want this to happen to any of my sisters either.

Mukhtar story dates back to 2002 and caused an international outcry when it emerged a village council had ordered her rape because her 12-year-old brother was accused of having illicit relations with a woman from a powerful rival family.

The 6 rapists made up of the council leader, a council member and the four local men convicted of carrying out the rape at gunpoint, were at first sentenced to death by a local anti-terrorism court.

But later five of them were later acquitted on appeal and another had his sentence cut to life imprisonment. In 2011, the Supreme Court upheld their acquittal. Ms Mai has been waiting since then to petition to review that decision.

“I have suffered for 17 years so I will keep coming back to this court again and again as long as it takes. I can’t stand down,” she said last week.

Mai remained in her Punjab village after the attack and used her compensation and donations to set up a girls’ school and refuge. Several of the children of her alleged rapists have attended the school.

Her attackers had at first tried to reach a compromise settlement with her, but she said she was determined to fight through the courts. None of the men had shown genuine remorse and believed that they could buy her off.

An almost arrogant attitude that is common amongst the powerful in a lawlaess country that echos from the top down. Life is cheap, death or murder is easy often cheaper than bribery.

However, with the new government, led by Imran Khan, her supporters hope a string of new laws as well as the Supreme Court’s decision to quash Asia Bibi’s blasphemy conviction show a shift in the judicial system to protect women.

In Pakistan, rape accusers need four witnesses she has the whole village as witnesses but it boils down to the feudal mindset of men in this patriarchal society.