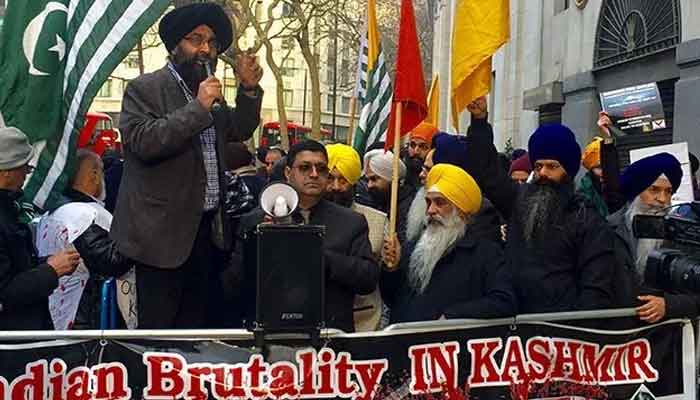 Bottles were thrown on Khalistani and Kashmiri protesters from Modi supporters and then the clashes started.

A protest in London demanding the end of atrocities against Sikhs and Kashmiris by the Indian government turned violent, with at least three people injured and two arrested by Scotland Yard.

The protest was mainly organised by a host of Uk and international Sikh organisations seeking the release of Sikh prisoners in Indian jails. The Sikh demonstrators were supported by Kashmiri groups who also joined the protest carrying flags of Kashmir.

The Sikh protesters carried banners demanding the creation of Khalistan, the creation of separatist state country for the Sikhs, and protested the imprisonment of Sikh activists by the Indian government.

The Khalistan movement is a Sikh separatist movement, which seeks to create a separate country called Khalistān in the Punjab region to serve as a homeland for Sikhs

They accuse the Indian government of silencing democracy and arresting the Sikhs for posting Facebook messages in support of Khalistan.

The protesters said that amongst those detained by India were British nationals who were picked up and convicted during their visits to Punjab in India. They mentioned, in particular, Ranjit Singh, Surjit Singh and Arvinder Singh, who were all jailed over Facebook posts.

The protest began peacefully until a pro-Modi group arrived on the scene and started hurling abuse at the peaceful protesters and produced placards disrespectful of Sikh religious symbols.

Bottles were thrown on Khalistani and Kashmiri protesters from Modi supporters and then the clashes started.

Activists from both sides exchanged fists and the Indian flag was brought down by Sikh protesters from outside the Indian High Commission. Three people were injured during the clashes.

In the clashes that followed, the whole of the area around Holborn and the London School of Economics was brought to a standstill for, as Scotland Yard responded to the altercation swiftly, by deploying about 10 riot vans.

A Pakistani reporter received injuries to his nose and eye after he was hit with an object during the fight.

Two protesters were seen being handcuffed by the police for getting involved in the physical fight. One protester was seen with blood pouring down his face.

Joga Singh of the World Sikh Parliament, speaking to the gathered international media, called for urgent steps to stop a war that would devastate the Sikh homeland and population.

Amrik Singh Sahota, Council of Khalistan, urged Sikhs and Kashmiris in Indian-controlled territories to act to stop the war and for Sikh soldiers to return to Punjab and protect its people in case full-scale hostilities break out.

Kashmiri leaders also urged global action to follow up the UN High Commissioner for Human Rights 2018 report calling for a halt to Indian hostilities in Kashmir and the delivery of long-promised self-determination in the disputed territory.