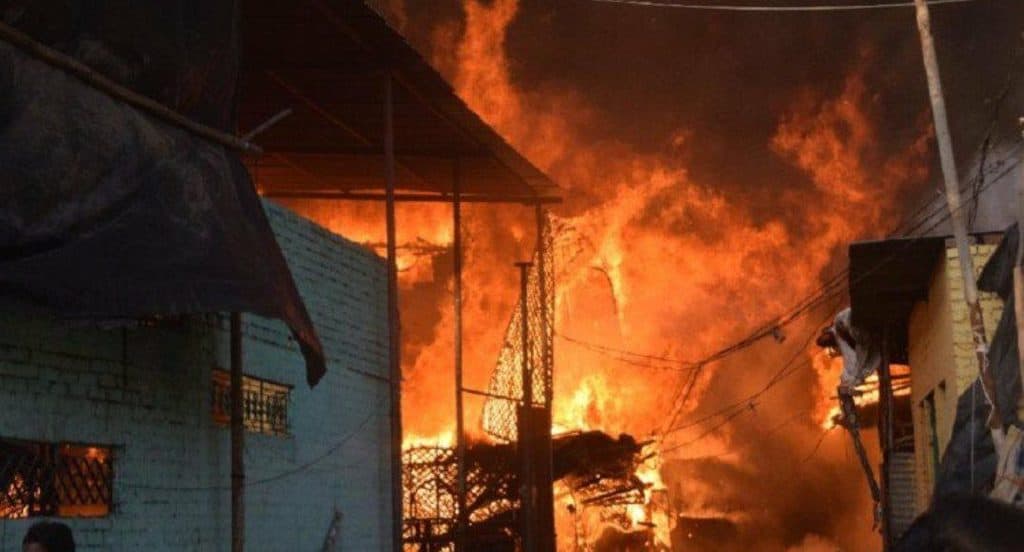 More than 200 Muslim houses were set on fire in Meerut city in Indian state of Uttar Pradesh during a so-called anti-encroachment drive by local authorities.

The houses were gutted in Meerut’s Bhusa Mandi slum. Residents said the police attacked their slum, burnt down their houses, assaulted men and women, and even fired at them.

Residents supported by the Hindu and BJP sympathizers in the police force, forcibly removed the residents from their houses, for illegally encroached upon the land, however, local reports suggest they have been instructed to carrying out such extreme evictions from the local extremists of BJP party.

The inhabitants of the burnt houses have been forced to stay in the open and mourn over their households-cum-ruins. The losses included not just their homes, but their belongings earned over a lifetime, including cash and valuables they collected for their children’s marriage.

The local police said, some inhabitants from the slum began pelting rocks at them and even set the houses on fire.

However, the residents denied the authorities version and blamed the police for torching their houses.

Hate attacks against Muslims in India have been on the rise under the BJP rule, and have been fueled after the recent tensions between India and Pakistan in the aftermath of the February 14 Pulwama attack.

Despite the rise in tensions between Hindus Muslims and Sikhs businesses are trying to diffuse the hostilities by creating harmonious ad campaigns. Detergent brand Surf, the largest in the region, created a heart-warming commercial promoting Hindu-Muslim harmony as part of its latest ‘Holi’ campaign.

The one-minute-long ad features a young Hindu girl, dressed in a white T-shirt, who chooses to get stained in ‘Holi colours’, a Hindu ceremony, in order to transport her young Muslim friend to a nearby mosque for prayers.

Despite the noble intentions of the detergent manufacturer, the company is facing a huge backlash. With the extremist circles in India who have created a hashtag #BoycottSurfExcel to protest the ad and its message of Hindu-Muslim harmony.

The world biggest election; democracy in action on April 11