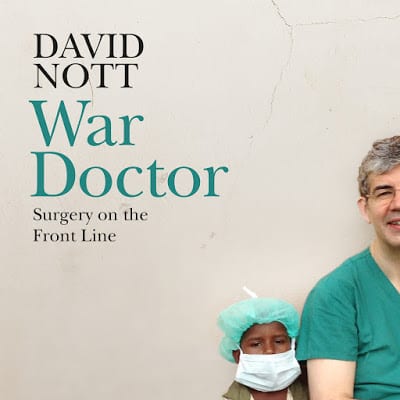 I’ve just finished reading a fascinating book written by the courageous doctor David Nott who for the last 25 years has taken unpaid leave from his job as a general and vascular surgeon with the NHS to volunteer in some of the world’s most dangerous war zones.

From Sarajevo under siege in 1993 to clandestine hospitals in rebel-held eastern Aleppo, he has carried out life-saving operations and field surgery in the most challenging conditions, and with none of the resources of NHS hospitals in the UK.

The conflicts he has worked in the form a chronology of 21st-century wars from Afghanistan, Sierra Leone, Liberia, Darfur, Congo, Iraq, through to Yemen, Libya, Gaza and Syria as well humanitarian service in areas hit by natural disasters like earthquakes in Haiti and Nepal.

His heroic efforts rather remind me of another surgeon who also wrote a book on his own extraordinary story: Dr Khassan Baiev whose accounts in The Oath are equally riveting. Baiev was a doctor caught up in the Russian-Chechen conflict as it moved into its bloodiest phase.

He ended up being shot at, imprisoned, tortured, bombed and beaten as he worked in appalling conditions trying to save lives regardless of who was perceived as friend or foe. The Oath title is in direct reference to the Hippocratic Oath sworn by all members of the medical profession which in theory should enable them to treat patients from all sides of a conflict freely and without favour.

Whilst our paths must have crossed in Gaza or the Rohingya refugee camps in Bangladesh, I don’t recall meeting Dr Nott but I have had the honour of meeting and interviewing Chechen doctor Khassan Baiev. They are both men cut from the same cloth.

Which brings me nicely to another heroic surgeon and that is Dr Shajul Islam who like Nott and Baiev is working under impossible conditions in Idlib, Syria. Islam and I met up just a few weeks ago as he was trying to help some of Syria’s amputee children walk again.

If you remember, I showed a video and introduced WTX readers to the story of little Naseem who was trying to stand by herself on her new prosthetic limbs. Naseem was just learning to walk when a missile fired by the Syrian regime landed on her home leaving her without legs and Dr Islam was among those trying to help her become mobile again.

Well, check out this latest video. Naseem is a quick learner and not only is she now walking unaided but it won’t be long before she’s running, says the doctor. I guess it’s little moments like this that make his work so worthwhile.

But please remember, there’s no NHS in rebel-controlled Syria and I’m told that the regime barrel bombs and Russian warplanes are bombarding Idlib once again. This means pain, injury and 24/7 demands being made on Dr Islam and the few other medics left working in Idlib.

Yet through it all, often operating by candlelight, without basic medical supplies and limited anaesthetics they continue to perform putting their lives on the line daily. Please help the local UK charities on the ground in Idlib so that Dr Islam and his team can continue in their work.