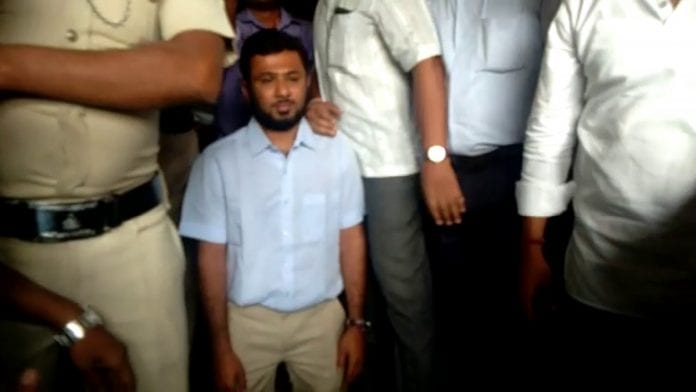 Hindu extremists forced a University professor in Karnataka to kneel down and apologise for praising Prime Minister Imran Khan.

Following his post, students and activists of the Akhil Bharatiya Vidyarthi Parishad (ABVP) staged a protest against Wathar and he was made to kneel down and apologise.

In a video which has gone viral on social media, the professor can be seen on his knees and apologising with his hands folded in the presence of Indian police.

The BJP party, however, defended the students’ and defended the rights of the students to assert their nationalism. “The professor has to take note of the deep sentiments of our army and the people of India in times of crises. You cannot make any statement praising Pakistan or something that negatively portrays India,” said party leader Vivek Reddy.

The administration of the college said they will meet on March 5 to discuss the issue and take ‘appropriate’ action against the professor.

Members of a Hindu right-wing students’ forced the professor, who feared for his life, to apologise on his knees for a Facebook post critical of the BJP

Emotions and tensions were high amid recent India-Pakistan hostilities and now the Professor has filed a police complaint into the incident.

India has seen a rise in right-wing fanatical Hindu groups who are taking a prejudicial stance in India against the Indian Muslim population and the Sikh Punjabi community.

The wife of one of the soldiers killed in the conflict, Mita Santra, was attacked online when she questioned the failure to prevent the attack and advocated peaceful dialogue with Pakistan. Some called her a coward. Others suggested she didn’t love her husband.

One of the BJP senior parliamentarians Hindu monk Yogi Adityanath has in the past verbalised the hate rhetoric that dominates the BJP, saying “If they kill even one Hindu, we will kill a 100!”.

In another, members of a radical youth group he founded in his home city are seen calling, as Adityanath looks on, for Hindu men to rape the corpses of Muslim women.

Especially alarming has been the way in which Indian news media, especially television, contributed to that pressure, trading journalistic responsibility for tabloid hysterics.

Supported by Indian politicians from the BJP who have a special talent for stirring up tension between Hindus and Muslims, who make up one-eighth of India’s population, that is causing the most alarm for the International community.