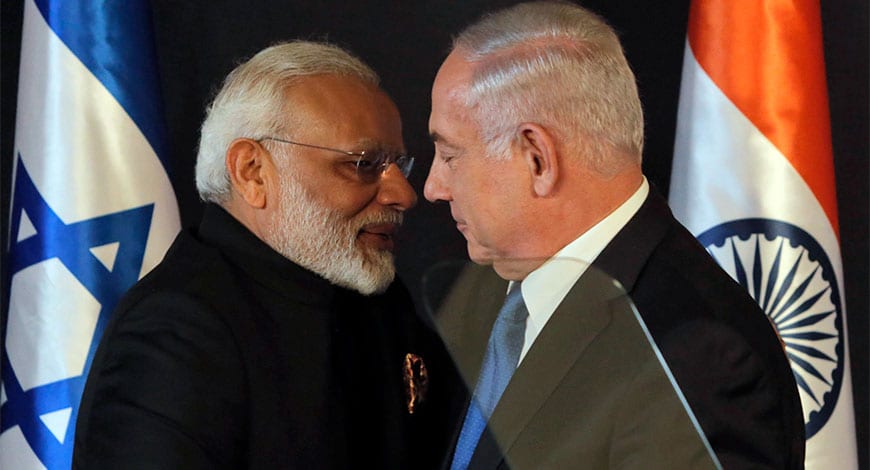 India is seeking a union with Israel and the US, unified in the destruction of Islamist terrorism

In the past 12 months, Israel has been working closely with India’s ruling party and military to create a secret alliance. One which can carry a coordinated offensive to Islamic terrorism.

In the meantime, India has now become the largest weapons market for the Israeli arms trade and a go-between with all the countries Israel cant trade with directly.

Further similarities in the manner in which India has conducted itself after the events and how it has manipulated the text and language to gain international sympathiser towards its cause. Similar to what Israel has been doing in Gaza, successfully for decades.

Not to ignore the fact that Israeli-made Rafael Spice-2000 “smart bombs” were used by the Indian air force in its strike against Jaish-e-Mohammed (JeM) “terrorists” inside Pakistan.

The PR campaign boasting the elimination  “300 terrorists” supposedly by the Indian authorities by the Isreali-manufactured bombs, it could, in fact, turn out to be false, but for now, all the official statements remain steadfast in this.

Israel managed a ‘realtime’ demonstration to showcase its warfare and effectiveness of their ‘smart bombs’. A live demonstration for potential new clients.

India is seeking a union with Israel and the US, unified in the destruction of Islamist terrorism. Since they have all have suffered at the hands of “Islamic terrorism”.

Both countries have an intertwined interest in fighting the war on terror and India is seeking to form a ‘holy trinity’ in the fights against Islamist terror cells around the globe, One which includes India, Israel and the United States.

This alliance has growing support in Delhi especially in the wake of recent capture of Indian pilot. the animosity between the nations pours gasoline on an already burning fire.

Perhaps, on this occasion, the gesture of Imran khans’ step towards peace will help settle the fired up politicians who are using this to drive their own political agenda.