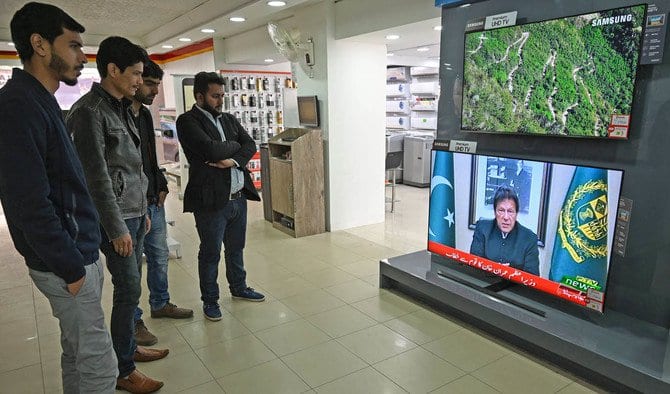 Prime Minister Imran Khan said on Thursday that an Indian pilot, who was captured by Pakistan’s armed forces this week, will be released on Friday in a bid to de-escalate tensions with his country’s nuclear-armed eastern neighbour.

He said “As a peace gesture, we will be releasing him tomorrow,” he announced while addressing a joint session of parliament.

Pakistan Air Force shot down two Indian fighter jets that had breached the Line of Control, or the de facto border separating the Indian- and Pakistani-administered portions of Kashmir, on Wednesday morning, before capturing a pilot.

As part of a policy statement on the floor of the House, Prime Minister Khan added that he had tried to speak to his Indian counterpart, Narendra Modi, on the telephone, reasoning that the recent escalation was neither in the interest of Pakistan nor that of India. “We aren’t afraid of anything, but want peace,” he continued.

US Secretary of State Mike Pompeo on Thursday said that he had spoken to both Pakistani and Indian leaders and urged them to avoid “any action that would escalate and greatly increase risk”.

Following the gesture of peace officials representing India’s armed forces said at a press briefing that they remain at a heightened state of readiness.

However, there was no mention of going on the offensive. The representatives of the armed forces said they would only respond if provoked.

Pakistan has closed its airspace in response to soaring tensions with India. That means all flights have been rerouted or are stranded until Islamabad reopens the airspace.

Thousands of holidaymakers were stranded in Bangkok on Thursday after Thai Airways cancelled all flights that normally are scheduled to travel over Pakistani airspace. With over 5000 passengers caught up in the flight delays, Thia authorities are waiting for permission to fly over other countries.

Flights going to London, Paris, Brussels, Milan and Munich were all cancelled on Thursday, while 10 incoming flights from Europe have also been cancelled.

Thousands of Pakistanis are stranded in Saudi and the Emirates hoping to be scheduled before the weekend.

Back Channel dialogue is still ongoing

Backchannel dialogue is still ongoing but so far no agreement has been reached. Some good news for the region. Both countries have stated they will not launch any further attacks but are still resolute in there defensive capability.

Many international countries have a vested interest in both countries and communication from Saudi Arabia and China have had an impact on creating a dialogue for communication.

Twitter erupts after Imran Khan announces the release of the pilot

Twitter from both sides of the eastern border was all praise for Prime Minister Imran Khan’s announcement that Pakistan will release the captured Indian Air Force officer, Wing Commander Abhinandan, on March 1.

Indian cricketer-turned-politician Navjot Singh Sidhu termed the act “noble” and said that the goodwill gesture “is a cup of joy for a billion people” of India.

PM Imran Khan received a telephonic call from President of Turkey Recep Tayyip Erdogan this evening.
President Erdogan congratulated the PM Khan on his Speech at the Parliament & his statesman like offers to India for de-escalating the situation and working towards peace. pic.twitter.com/5ma5bAnBSt

Khan thanked Turkish president for his constant support to Pakistan and the Kashmiri people.

The two leaders agreed that President Erdogan’s visit to Pakistan for the Pakistan-Turkey High-Level Strategic Cooperation Council meeting would provide the opportunity for an in-depth overview of bilateral relations and the way forward.

Both countries are and the leadership are conscious of public opinion and neither will want to be perceived as weak. Maintaining the upper hand for each party is arguably the crucial point as negotiations develop.

For Modi, can he sell the narrative ‘Pakistan were fearful of our retaliation and curbed to releasing our pilot before we responded with the might of the Indian army?’ In election mode, Modi must find a solution that will get him reelected in May.