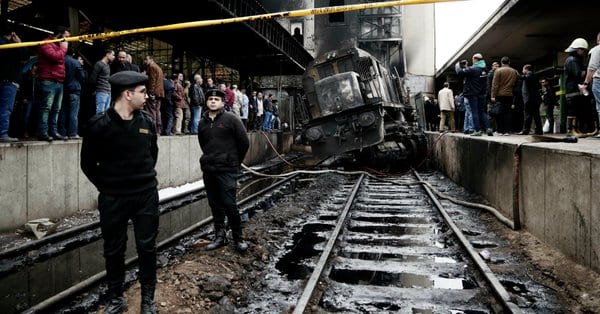 A deadly train crash which killed at least 25 people and injured dozens more was caused by a driver leaving his vehicle unattended without turning off its engine to speak with the driver of another train, according to Egypt’s prosecutor-general.

Prosecutor General Nabil Sadek issued a statement revealing the preliminary results of an investigation into the crash, saying the train involved in the deadly collision had been on its way to a train yard when it was struck by another locomotive on an adjacent train line.

The driver of the first train left it unattended without turning off its engine to speak with the other driver, who was already working on disengaging his train from another locomotive.

When the two trains disengaged, the now-unmanned train moved at high speed towards the railway station until it collided with a concrete barrier at the end of the train line and burst into flames.

The prosecution has tasked forensic experts with using DNA tests to identify the charred remains of the victims.

“The driver left the railcar without taking any measures to break it,” Prosecutor General Nabil Sadek said in a statement.

Health officials say at least 25 people were killed and dozens more injured in the crash and ensuing fire.

The moment a fireball ripped through Egypt’s Ramses Station as a high-speed train smashed into a metal barrier killing at least 20 people and injuring 50 on Wednesday was captured on video.

Another railway tragedy in #Egypt. Dozens killed and many more injured in a huge fire at the main railway station in central #Cairo after train crashes into platform. #RamsesStation #محطة_مصر #رمسيس
pic.twitter.com/aUWmTM9Hcg

Dozens of people were injured when the train smashed into a steel barrier, erupting into a ball of flames at Ramses station in central Cairo. Egypt’s health ministry said the number killed was 20 but Associated Press reported that the death toll was at least 25.

Social media footage showed images of people fleeing and what appeared to be burnt corpses strewn across the platform and railway track below.

Thick black smoke could be seen rising high above the area as the flames engulfed the station platform.

Blood Donors at the blood bank close to the hospital where majority of National Railway runaway train victims were taken to #Cairo #Egypt pic.twitter.com/m88RWj1dy3

Egyptian Prime Minister Mostafa Madbouly arrived at the scene and pledged in a statement to reporters to investigate and hold those responsible for any negligence to account.

The transportation minister and governor of Cairo were also at the scene.

Railway operations were immediately stopped after the incident but returned to full operation at 10:42 a.m. (GMT).

Dozens of people are being treated in hospital

Security sources said there was no indication that the crash was deliberate.