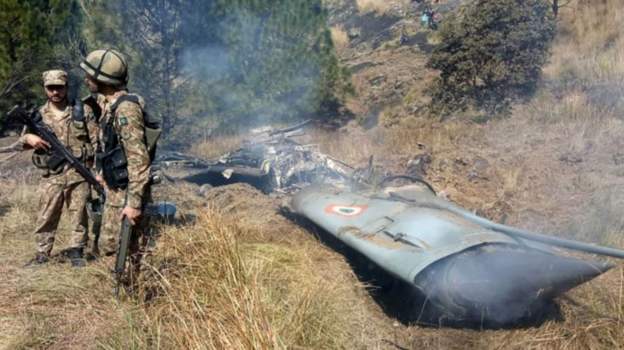 There is only one pilot under Pakistan Army’s custody. Wing Comd Abhi Nandan is being treated as per norms of military ethics. pic.twitter.com/8IQ5BPhLj2

The Indian Ministry of External Affairs (MEA) summoned Pakistan acting high commissioner in New Delhi to protest what it called an “unprovoked act of aggression by Pakistan against India”.

It condemned what it said had been the “vulgar display of injured personnel of the Indian Air Force” and suggested Pakistan had violated international humanitarian law.

It warned Pakistan that it would be “well advised” to ensure that no harm came to the pilot.

Both India and Pakistan recalled their ambassadors after the militant attack on 14 February that sparked this crisis.

In a demarche issued to the Pakistani envoy, it was alleged that the Pakistan Air Force on Wednesday violated the Indian air space and targeted Indian military posts.

“This is in contrast to India’s non-military anti-terror pre-emptive strike at a JeM terrorist camp in Balakot on 26 February 2019,” the ministry claimed in a press release.

According to the statement, India also objected to what it called “Pakistan’s vulgar display of injured personnel of the Indian Air Force” who was captured by the Pakistan Army, saying it was in violation of international law.

Pakistan demarched on the act of aggression against India

The Acting High Commissioner of Pakistan was summoned this afternoon by MEA to lodge a strong protest at the unprovoked act of aggression by Pakistan against India earlier todayhttps://t.co/jN9Ym2qTpC pic.twitter.com/AQ2gcVw82Z

India’s prime minister Modi has so far made no public comments on the matter, at a time where his public image is crucial to his re-election campaign. He must present himself and be seen as strong and firm with Pakistan.

Pakistan’s Prime Minister Imran Khan has called for a de-escalation of the situation and warned against any further knee-jerk reaction.