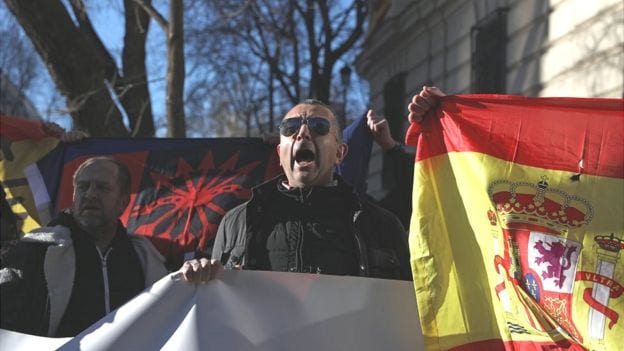 We should all hang our heads in shame over the treatment of a group of political prisoners who are today facing a show trial in Spain.

While the rest of the world looks the other way, millions of ordinary people will not forgive or forget the behaviour of the  Madrid government after the unofficial referendum in October 2017.

Back then the pro-independence political parties in the Catalan parliament unilaterally declared independence from Spain and those democracy-loving people have been punished ever since.

Invoking Article 155 of the Spanish Constitution, Madrid effectively suspended the region’s autonomy and ousted Catalan leader Carles Puigdemont. He has been in exile in Belgium ever since along with half a dozen other leading Catalonians.

One of those in exile is the wonderful former education minister Clara Ponsati who was given sanctuary in Scotland where she now works as an economics professor at the University of St Andrews.

Join the WTX family with a 50% discount applied to your annual membership.

She and her Scottish lawyer Aamer Anwar, has been particularly vocal about the actions of Spain and both say the government are using political prisoners as pawns in a bid to suffocate the pro-independence movement.

“Talking to Spain now is like sitting down with a gangster holding hostages,” Anwar said recently.

The start of the show trials involves two of the organisers, Jordi Cuixart and Jordi Sanchez, who have been in prison for over a year. Another seven are also in prison, including Carme Forcadell, who was the speaker in the Catalan parliament.

In total 12 political prisoners will be put on trial in front of the Spanish Supreme Court. Ten of the 12 judges are appointed by politicians while the remaining two are drawn from the General Council, whose members are also appointed by politicians in Madrid. Alarmingly, the Supreme Court has ruled against international observers, including those from Amnesty International, sitting in on the trial.

Nine of the prisoners are being tried for sedition and rebellion with the remaining three facing lesser crimes. The fear is their fate is already sealed.

There will be protests and demonstrations throughout the trial. We must all show the Spanish Government that Kangaroo Courts in the heart of Europe are not acceptable.

Freedom and independence always come at a price and the people of Catalonia have already made a costly downpayment so far but I am convinced they will get justice in the end, no matter the price in human terms.