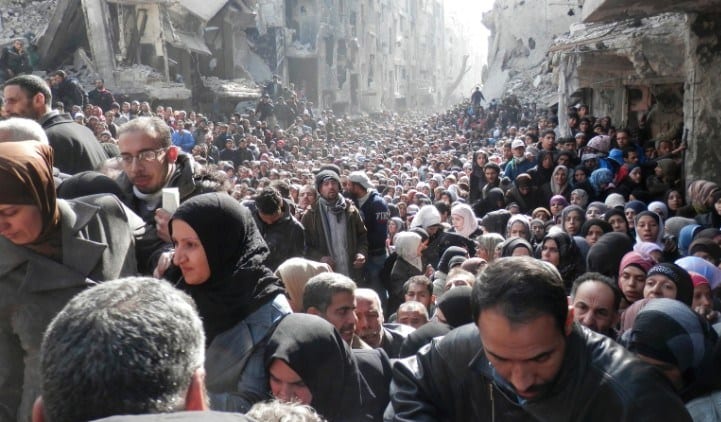 The UN has verified 7,000 cases of children either killed or maimed in Syria’s seven-year war, but says unverified reports puts the number way beyond 20,000.

Syria has suffered an immeasurable amount of destruction; civilian causalities, military deaths and the destruction of some of the magnificent middle eastern country. So how can the two most powerful military alliance, with the fiercest arsenal and latest in modern weapons not defeat the so-called Islamic state IS or whatever name it goes by these days.

The prowess of IS can literally be summarised in one sentence which is, that IS are so desperate for world recognition that they claimed responsibility for the horrible Las Vegas massacre.

Yet despite the desperation and mediocrity, it has managed to hold off a sustained attack from Russia and the Assad regime and the United States and allies. Meanwhile, data from the UNHCR suggests that over 3 million refugees have fled to Turkey and hundreds of thousands to other parts of the world. Turkey has become home to the biggest number of refugees in the world.

In retrospect, Turkey’s welcoming of Syrian refugees is an almost unparalleled act of human decency and one for which the Turkish government and citizens derive much credit. But the truth is that the eventual scale and magnitude of the Syrian refugee crisis caught officials in Ankara by surprise.

The image the world should never forget should haunt everyone eternally for the failings of the world’s response to such a catastrophic failure in mankind. Even as I am writing the horror of this image is unnerving.

The UN has verified 7,000 cases of children either killed or maimed in Syria’s seven-year war but says unverified reports put the number way beyond 20,000.

Bearing in mind this conflict has cost the lives of between 500,000 and one million civilians, displaced more than half of the country’s 22 million population, and involved countless atrocities and crimes against humanity, it is more than disheartening to realise that half the world couldn’t care less while a large proportion of the rest want to forget about Syria.

And while Qatar is adamant it will not re-open its embassy in Damascus, both the United Arab Emirates and Bahrain opened theirs last month in the Syrian capital stating they were merely seeking to counter Iranian influence, claims which no one else is really taking seriously.

Over the last decade, Russia’s influence and power has grown significantly, not just in the middle eastern region, but also on the world stage. More economic relations, stronger diplomatic ties and Putin’s influence and presence as an alternative to Trump.

Russia, has always been a world power but for the first time in 50 years it has grown into a real threat to US influence over the world and as the host nation of the Football World cup last Summer, many commentators suggest this as a new dawn of proxy wars.

The Syrian conflict is complex and far more difficult to understand that a war between two opposing armed forces. Despite what left-leaning conspiracy theorists will have you believe, the democratic uprising against the regime began over the arrest, detention and torture of a group of schoolboys in Dar’a.

It did not begin with CIA interference, nor an influx of foreign fighters, Al-Qaida, rebranded weapons from the West, NATO or a global call across the Muslim world for jihad.

This all began following a reluctant revolution, a revolution forced on the people by the acts of an evil, malevolent regime.

When the civil war began in 2011, there were four main factions of fighting groups throughout the country: Kurdish forces, ISIS, other opposition (such as Jaish al Fateh, an alliance between the Nusra Front and Ahrar-al-Sham and the Assad regime.

In December US President Trump tweets, “We have defeated ISIS in Syria, my only reason for being there during the Trump Presidency.” A US defence official and an administration official told us that planning for the “full” and “rapid” withdrawal of US military from Syria is already underway, but now they are not so sure.

The truth is that despite all the forces fighting each other, politically, attacking each other and working on taking control of the resources left in the country, the one undisputed truth is millions of Syrians are displaced and starving.