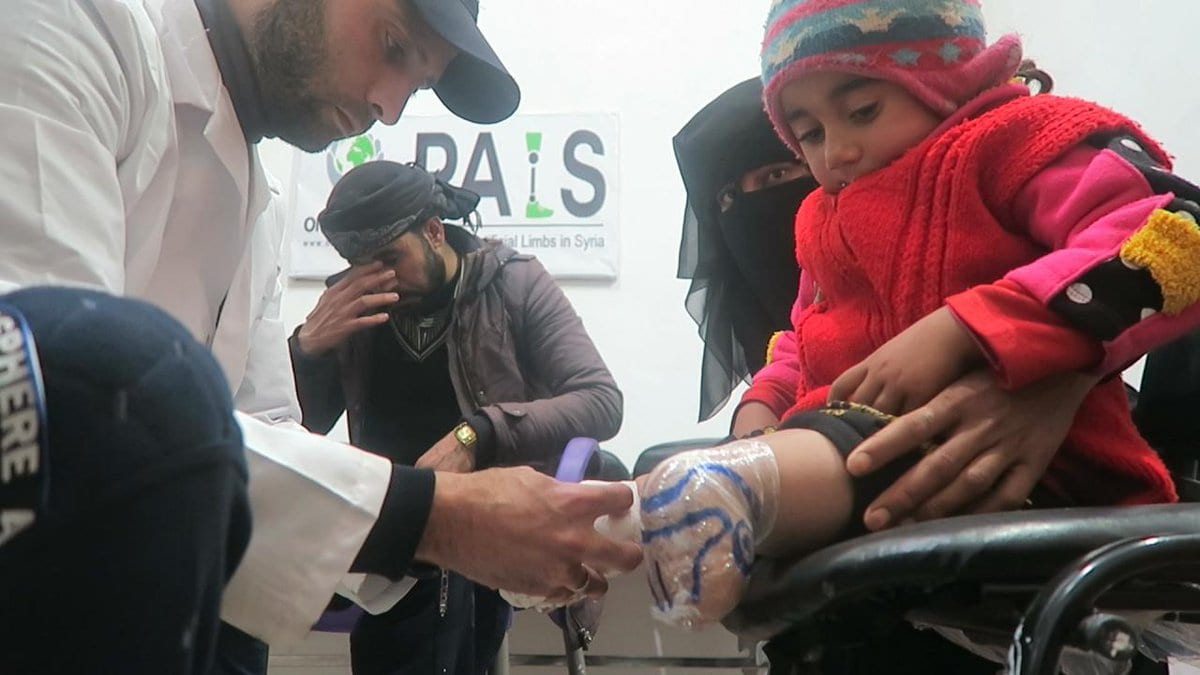 A number of small British charities run by heroic individuals and community groups are facing uphill struggles for survival because of the red tape thrown at them by the Charity Commission which stands accused of being more obsessed about box ticking legislation than helping child victims of war.

The problem has become so serious doctors the ground in Syria fear projects to help amputee children walk again will have to be abandoned unless a common sense solution if found.

The focus of the problem at the moment is over who controls rebel-held Syria and especially the international Bab al-Hawa border between Rehanli in Turkey and Syria.

In July 2017 two rebel groups, Hayʼat Taḥrīr al-Shām (HTS) and Ahrar al-Sham reached an agreement that they would hand over the crossing to a civilian administration so that the flow of humanitarian aid could resume. However, HTS retains control of the towns, villages and roads around it, leaving them in a controlling position.

Although civil officials operating the crossing insist all revenue generated (estimated at $25 million dollars a year in late 2016) goes to the local civil administration it’s obvious that some UK-based officials are not convinced.

Quite frankly, having seen the work of doctors at amputee clinics, I think there are far more important issues for the Charity Commission to grapple with instead of piling undue pressure and red tape on to small charities who are sending or attempting to send aid into the rebel-held territory in the Idlib province.

While I can see the CC will be keen that militias on the ground do not benefit from charitable giving, by the time much of the aid reaches northern Syria it is in the shape of prosthetics, medicines and other materials which are of little or no value in terms of currency to anyone other than amputee children and other victims of war.

I recently contacted the Charity Commission of England and Wales to discuss a particular project which provides hi-tech prosthetics for child amputees saying it was at risk because of the pressures exerted by the CC. Having seen and spoken to the children first hand who benefit from these speciality products, I am disturbed the project may come to an end because it is being strangled by red tape from the CC.

“This alert was prompted by recent media reporting which raised concern about the situation at the Bab Al-Hawa crossing. It is intended to raise awareness amongst charity trustees, volunteers or employees, in order to avoid their charity being misused and ensure public trust and confidence in their charity is maintained.

“The alert is not intended to be prohibitive in itself. It is aimed at helping trustees take appropriate action in the best interests of their charity. This may include reporting concerns, informing themselves about risks, suspending or stopping the movement of aid via the crossing at this time, or exploring alternative routes.

“Our advice is based on existing legal obligations that charities and everyone else has under the Terrorism Act 2000 to report actual or suspected instances of loss of assets to terrorist groups. It does not create new rules or restrictions on charities operating in the region – we are simply alerting charities to the risk and what they need to consider in order to operate in the region safely.

We hope that this will minimise the risk of important charitable activity being compromised.”While I can appreciate the need for such alerts I still think a common sense approach can be embraced for those small charities which are often reliant on the goodwill of a handful of individuals or small communities.

Setting out with a lorry load of aid overland from the UK is time-consuming and the situation on the ground in war zones often fluctuates and changes, especially somewhere are volatile as Syria.

This is 4 year old Naseem. She was only 1 year and 3 months old when she was injured and lost both her legs when a missile hit her home the same week that she learnt to walk.

Should small charities abandon these mercy runs then those who will really suffer will be the vulnerable, especially children. It is something which focusses the mind of the British medic Dr Shajul Islam I interviewed in this video, who works at one of the Idlib hospitals providing help to amputee children.

The ongoing struggle for access to assistive technology is something which causes huge frustration among medical staff in Idlib because those who lose limbs can benefit from technology which turns impossible dreams into reality. The two little boys I watched taking their tentative first steps after losing limbs courtesy of Assad’s barrel bombs showed a determination and courage one rarely sees in children of that age.

There were no squeals of delight or peels of laughter from either boy, just a grim determination to try and get back a life devastated by war. I doubt if either of them really cares who is in charge of the Bab al-Hawa border crossing but I bet they wonder at the generosity of those who support the charity One Nation and its fundraising initiatives.

Now the big challenge facing everyone at the prosthetic centre in Idlib is getting four-year-old Naseem back on her feet. Little Naseem was barely 15 months old when she took her first few faltering steps in the world but her excitement was short-lived thanks to a missile attack on her home which took away both of her legs.

Please watch this video and see how important it is that this project continues. Next time I visit Idlib I want to be able to tell you how Naseem is turning her baby steps in to giant strides instead of tripping over red tape and other obstacles caused by officialdom back in the UK.