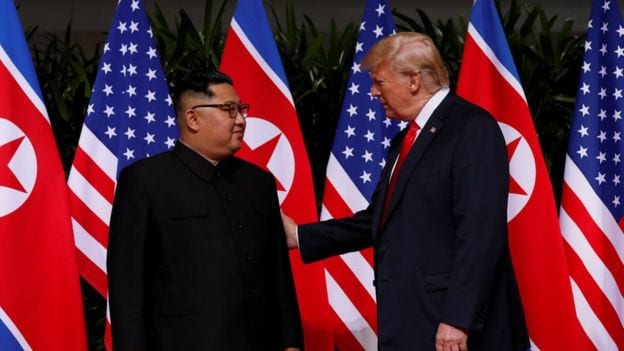 He had been expected to deliver a letter from Kim Jong-un to Mr Trump. But not a great deal was achieved in the first summit, despite the international attention and headlines.

Very few are convinced much more will be achieved by this summit apart from creating some great PR for both leaders.

Little progress has been made on denuclearisation since their historic summit in Singapore last June. No venue has been announced for the new summit.

“President Donald J Trump met with Kim Yong Chol for an hour and a half to discuss denuclearization and a second summit, which will take place near the end of February,” White House spokeswoman Sarah Sanders said. She said a location would be announced later.

The summit was announced even though there has been no indication of any narrowing of differences over the US demands that North Korea abandon a nuclear weapons program that threatens the United States and Pyongyang’s demands for a lifting of punishing sanctions.

Sanders said that Trump’s talks with the North Korean envoy were productive but added that the United States “is going to continue to keep pressure and sanctions on North Korea.”

South Korea’s presidential office said it expected the upcoming summit to be a “turning point to lay the firm foundation for lasting peace on the Korean peninsula.”

South Korea will work with the United States and other countries to “achieve concrete and practical results toward complete denuclearization and a lasting peace regime through the North Korea-US summit…,” presidential spokesman Kim Eui-kyeom said in a statement on Saturday.

South Korea will also expand the inter-Korean dialogue to help a successful meeting between Trump and Kim, he added.

The first summit produced a vague commitment by Kim Jong Un to work toward the denuclearization of the Korean peninsula, but he has yet to take what Washington sees as concrete steps in that direction.

Nevertheless, both he and Trump had expressed an interest in arranging a second meeting, something some US-based analysts see as premature.

Critics of US efforts say the first summit only boosted Kim’s international stature without much to show for it, and some believe Trump may see a second meeting as a way of distracting from his domestic troubles.

Trump declared just after the Singapore meeting that the nuclear threat posed by North Korea was over. But hours before Kim Yong Chol’s arrival on Thursday, the US president unveiled a revamped US missile defence strategy that singled out the country as an ongoing and “extraordinary threat.”

Harry Kazianis, an analyst at the conservative Washington-based Center for the National Interest, called the agreement to hold another summit positive. But he added: “Both nations must now show at least some tangible benefits from their diplomatic efforts during a second summit, or risk their efforts being panned as nothing more than reality TV.”

Communist-ruled Vietnam, which has good relations with both the United States and North Korea, has been widely touted as the most likely site of the next summit. There has also been speculation about other possible venues, including Bangkok, Hawaii, or a return to Singapore.

Political commentators suggest that the US administration need a distraction from Trumps – Russia investigation and are forcing this meeting to bury the headlines.

The last summit was a rollercoaster in itself, it dominated media headlines as the drama unfolded, it started and then it was cancelled and then restarted after a hand-delivered letter to Mr Trump from Mr Kim.