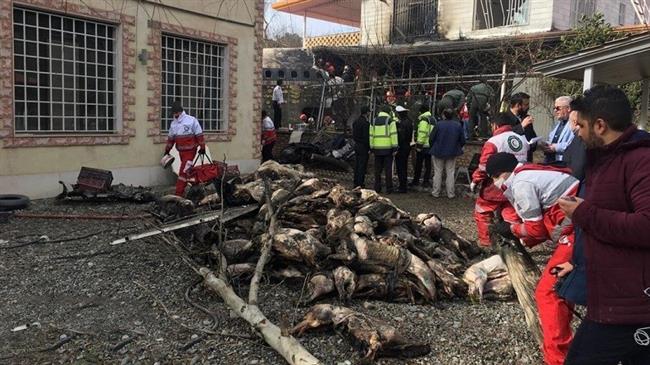 A Boeing 707 cargo plane coming from Kyrgyzstan crashed on Monday while trying to land west of Iran’s capital, state media reported, with an emergency official saying only one person of the 16 on board was known to have survived.

The head of Iran’s emergency department, Pirhossein Kolivand, said the bodies of seven people had been found, and they were searching for the other corpses but remarkably the flight engineer is reported to have survived the crash but is in critical condition.

Fire immediately engulfed the aircraft after it skidded off a runway and crashed into a wall separating the Fath Airport from a residential neighbourhood. Images carried by Iran’s state-run media showed the burned-out tail of the plane sticking out, surrounded by charred homes.

The plane crashed at Fath Airport, which belongs to Iran’s powerful paramilitary Revolutionary Guard, when it was meant to land at the nearby Payam International Airport, about 25 miles west of Tehran.

Authorities did not immediately offer a reason for the crew’s decision to land there, though they said the crew had declared an emergency prior to land.

The military cargo aircraft crashed and caught fire near the city of Karaj on Monday morning while attempting to land in the wrong airport.

It wasn’t immediately clear who owns the plane, though Gen. Shahin Taghikhani, an army spokesman, told state TV that the plane and its crew were Iranian.