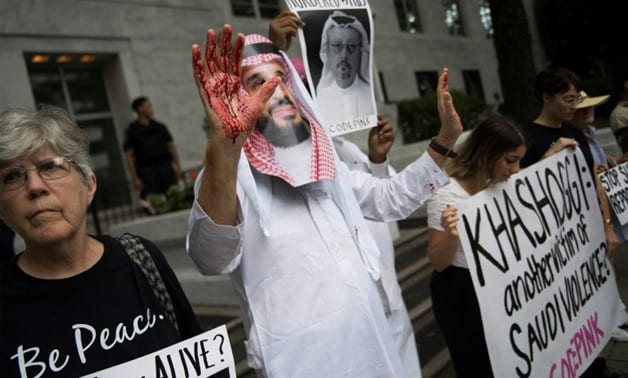 Will anyone ever accept an invitation to enter a Saudi embassy again?

Following the worldwide spotlight on the circumstances surrounding the death of the Saudi Journalist Jamal Khashoggi. A CIA briefing into the murder has exposed the evidence linking the Crown Prince to the murder.

Some of the most important evidence may be a circulating audio recording of the murder that Turkey said it has distributed, that was not played in Tuesday’s briefing by the CIA.

Two key US Republican senators said on Tuesday after an in-depth briefing by the CIA’s director that they have “zero” doubt Saudi Arabia’s crown prince directed the murder of journalist Jamal Khashoggi.

The explosive new declarations by members of President Donald Trump’s own party run counter to the White House narrative downplaying possible links between Crown Prince Mohammed bin Salman and the October killing of journalist and palace critic Khashoggi at the kingdom’s Istanbul consulate.

“I have zero question in my mind that the crown prince directed the murder and was kept appraised of the situation all the way through it,” Senate Foreign Relations Committee Chairman Bob Corker told reporters after CIA director Gina Haspel briefed a small group of senators.

“If MBS (Mohammed Bin Salman) were in front of a jury, he’d be convicted in less than 30 minutes.”

Fellow Republican Senator Lindsey Graham, a Trump ally who has joined a growing collection of lawmakers urging the president to take a far tougher stance against Riyadh over the killing, also attended the hour-long closed-door briefing and minced no words afterwards.

US newspapers, including The Wall Street Journal, have reported that the CIA has evidence that Prince Mohammed exchanged 11 messages with his close aide Saud al-Qahtani, who allegedly oversaw the murder, just before and after it took place.

After reports that the CIA concluded that the crown prince ordered Khashoggi’s assassination in the Istanbul consulate on October 2, Trump issued a statement saying US-Saudi relations and oil market stability were too important to rock over the scandal, further emphasising the loyalty to Saudi Arabia.

My Tweets
We use cookies to help identify your computer so we can tailor your user experience, track shopping basket contents and remember where you are in the order process. WTX News Our Cookie Policy
Global economy boost as trade war truce boosts markets
A British Vote for a very British Future
To Top
Weekly