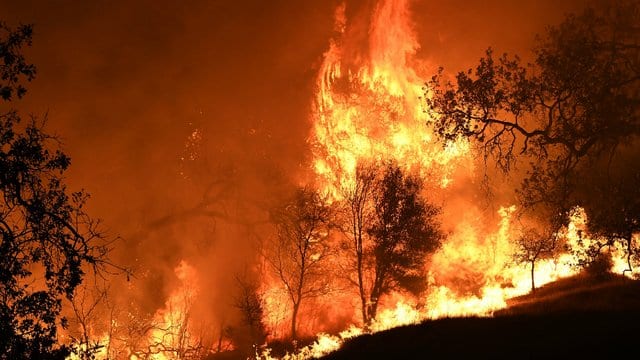 Even though he is annoying people in Europe, US President Donald Trump has also managed to upset Californians who are reeling from the horrific wildfires raging through California which have killed 25 so far.

Trump blamed poor forestry management for the blaze which swept through Butte County on Thursday. Firefighters were powerless to stop it destroying the town of Paradise and then another fire swept into the glitzy resort of Malibu on Friday.

Among the towns under evacuation orders is Thousand Oaks, where a gunman shot dead 12 people in a killing spree on Wednesday.

Meteorologists say hot dry “devil winds” blowing through the Los Angeles area are to blame for the huge blaze which firefighters reckon will take about three weeks to bring under control.

The fire started in the Plumas National Forest, north of Sacramento, on Thursday and quickly engulfed the town of Paradise. Residents fled for their lives as more than 6,700 homes and businesses were destroyed, making the fire the most destructive in the state’s history.

Totally unprecedented, the inferno moved so quickly drivers were forced to abandon their cars and flee on foot.

However US President Trump tweeted on Saturday: “There is no reason for these massive, deadly and costly forest fires in California except that forest management is so poor. Billions of dollars are given each year, with so many lives lost, all because of gross mismanagement of the forests. Remedy now, or no more Fed payments!”

Evan Westrub, spokesman for state Governor Jerry Brown described Trump’s comments as “inane and uninformed” and some of the celebrities caught up in the disaster also condemned Trump. California-born singer Katy Perry called it an “absolutely heartless response”, while singer-songwriter John Legend said Trump “can’t bring himself to show some empathy to Californians dealing with a horrific disaster”.