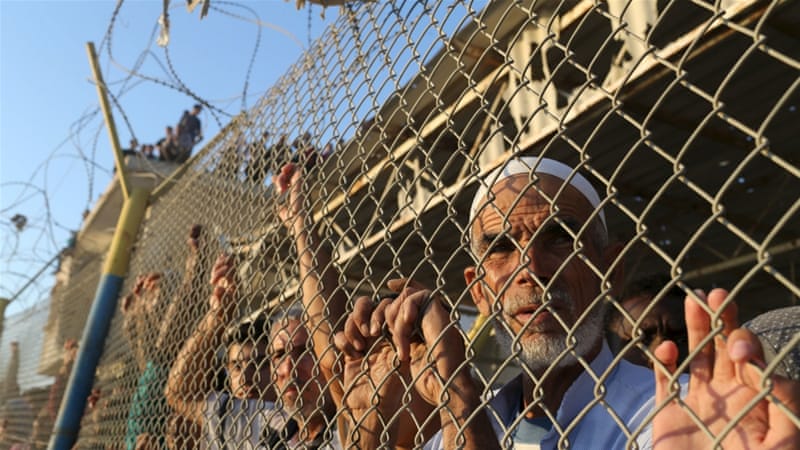 Palestinians continue to suffer in Gaza, no food, endless loss of life and Israel playing politics with Hamas

It is a place where life has long been cruel, were refugees forced out of Israel during the Nakba and families who have lived in Gaza for generations have suffered under dire conditions for nearly 70 years.

Israel is counterintuitively marching towards war in order to ensure that those popular protests are taken out of the spotlight. Close to 2 million people live under siege in the Gaza Strip.

Men, women and children joined the movement as it ballooned in size to the tens of thousands. Throughout the summer, these protesters risked everything to confront soldiers at the border.

The world watches on as atrocities are committed. Sniper target shooting by Israeli soldiers, rape and humiliation at the border crossing, whilst maintaining the guise of border peacekeeping, in this peacekeeping mission Israel has been killing and wounding thousands of protesters, at will. The news often masked by Trump’s hideous tweets.

Both Israel and Hamas – the forces with the most to lose from a genuine popular rebellion in Gaza – have failed to engage this movement, to understand the core motives the propel it or to evaluate its future. The protesters didn’t risk life and limb because Hamas told them to; they confronted Israel because they have nothing left to lose.

Israel’s initial response to the protests was unsurprising, but it was swift. It immediately responded with the type of military force that cast the protests as a security challenge devised by Hamas tacticians.

Instead of engaging with the protesters as a civilian population with legitimate grievances against the siege and against Hamas’ leadership, Israel viewed them as an armed threat.

The majority of Gazans want day-to-day life in the Strip to improve, yet Israel as the occupier is unable or unwilling to work with this majority to achieve this simple goal.

Such is the daily reality of life in the Gaza Strip, the narrow Mediterranean enclave that is home to nearly half of all Palestinians living under Israeli occupation. Nearly two-thirds of Gazans are refugees or the descendants of refugees.

2 million people locked inside a land mass the size of Philadelphia, the borders carefully controlled, the movement of goods and humans severely restricted, the population facing food shortages and the young struggling with unemployment. Civil wars have started for a lot less.

Hospitals are forced to rely on generators for life-saving equipment, while supplies of life-saving medicines dwindle to dangerous levels.

Looming in the not-far-off distance, as water treatment and desalination plants, stop working, the risk that drinking water will run out, Isreal is hoping, along with this nourishment, so will hope.

After a decade living in crushing poverty and isolation, the majority of Gazans are simply fed up – with everyone.