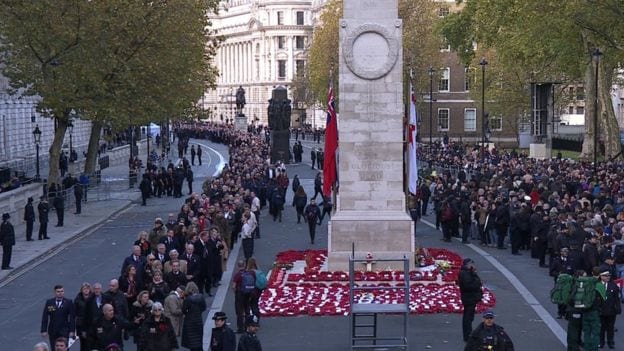 Remembrance services have also been held in London, Paris,Wales, Scotland and St Anne’s Cathedral in Belfast.

Ten thousand people marched past the Cenotaph in London to honour those who died in World War One. To mark 100 years since the end of World War One.

The Queen observed the silence in Whitehall from the balcony of the nearby Foreign and Commonwealth Office. The Duke of Edinburgh, however, was absent.

Prince Charles laid a wreath on behalf of the Queen after two minutes’ silence at 11:00 GMT that marks the end of WW1, symbolised at 11 am of 11 November 1918. Signifying the time when the fighting ceased.

Armistice Day falls each year on 11 November to mark the day in 1918 when the fighting in World War One was stopped.

Prince Charles was followed in laying a wreath at the Cenotaph by German President Frank-Walter Steinmeier followed Prince Charles in laying the wreath at the Cenotaph as did the Prime Minister and Labour leader Jeremy Corbyn. Frank-Walter Steinmeier is the first German leader to take part in the national service of remembrance.

The march was described by organisers as a “nation’s thank you” to all those who fought in World War one and featured descendants of veterans from across the country.

Special events have also been held throughout the UK and around the world to honour those who died.

Remembrance Sunday is an inclusive event that has united many. UK nationals including descendants from India and Pakistani community also took part to remember those who also served in the war took part in locally organised events.

In France, where many of the battles of the Western Front were fought, world leaders gathered for a ceremony at the Arc de Triomphe in Paris, hosted by French President Emmanuel Macron, he urged the assembled world leaders to come together in a joint “fight for peace”. The event was attended by Donald Trump and Angela Merkel and 68 other world leaders.

Later today at 7:00 pm GMT, following a special service at Westminster Abbey, more than 1,000 beacons will be lit across the UK.

The lights are intended to symbolise the end of the darkness of war and a return to the lightness of peace.

Nicola Sturgeon, Scotland’s first minister, called it an “opportunity for this generation to express our gratitude” a poignant reminder for us all.