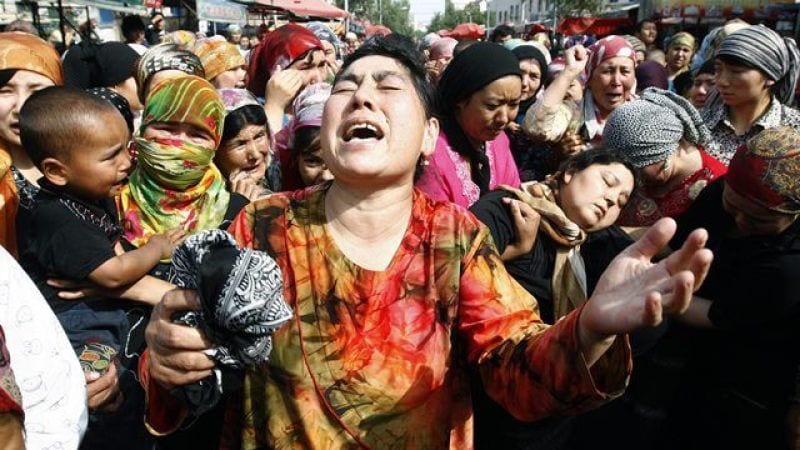 Muslim Uighurs, who have been under Chinese occupation for 68 years and have been subjected to systematic torture – Now it must stop!

The Chinese leadership is cracking down harshly on unrest in Xinjiang. The region’s Muslim Uighur’s feel degraded and robbed of their culture while they suffer in their homeland.

As China did in Tibet, a ‘mien kampf’ style regime is being sold and branded, to the outside world, as anti-terrorism training by Beijing. Albeit cautiously the international community is beginning to raise direct concerns to the Chinese.

Australia’s foreign minister is the first to raise the issue directly to the Chinese, on a state visit. Highlighting the treatment of Uighur minorities in Xinjiang at a meeting with her Chinese counterpart yesterday as Beijing comes under increasing international scrutiny over its controversial security policy.

Human rights trashed in the name of terrorism

Marise Payne spoke after meeting with China’s chief diplomat Wang Yi on the first visit to Beijing by an Australian foreign minister in nearly three years as both countries pursue a thaw in relations.

Payne visited Beijing for the Fifth Australia-China Foreign and Strategic Dialogue. It is rare for foreign officials to publicly chastise China over its human rights record during a visit to the country.

Earlier this week, Payne said she would register “serious concerns” over the huge facilities in northwestern Xinjiang region, where activists say up to 1 million Uighurs mainly-Muslim minorities are detained in political re-education camps.

She said “We did exchange views on that matter,” at a press conference alongside Wang, but she did not elaborate on what she had told him behind closed doors.

The United States and other countries have called on China to release people held in the detention centres.

Earlier this week China also faced a grilling at the UN Human Rights Council in Geneva on Tuesday. The Chinese delegation responded by reiterating Beijing’s branding description of the camps as vocational “training centres” that were built to help people drawn to extremism stay away from terrorism and allow them to be reintegrated into society.

The reports coming from the camps highlight abuse and torture towards the Muslim community, forcing them to eat pork and consume alcohol. China has battled an ugly human rights history and as a superpower is far behind many third world nations in human rights abuses.

Advocacy groups including Human Rights Watch want the Human Rights Council to press Chinese authorities on issues like the use of mass detention centres in the western Xinjiang region where many Uighurs live.

Although the UK has not directly condemned the Chinese publically, concerns have been raised by dowing street staff, however, with major post-Brexit deals looming No 10 does not want to rock the boat by annoying the Chinese.