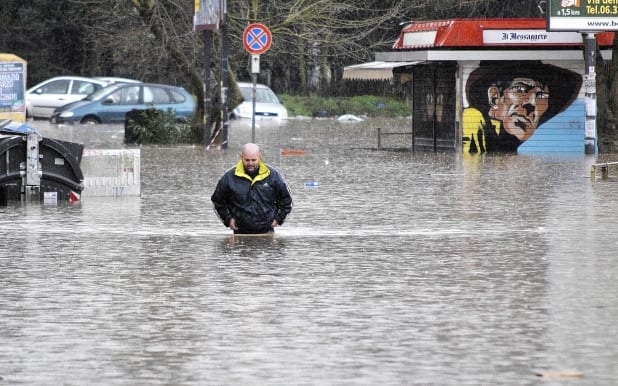 Four men died when a mudslide suddenly hit a villa in the southern Calabria region’s Crotone province. And two boys were killed by falling trees

At least eleven people have died in Italy as gale-force winds brought trees crashing down and rivers were flooded due to heavy rain, rescue services said.

The whole Italian peninsula with floods and rivers overflowing in the north, coastal storms in the Liguria region, and high winds in the Lazio and Campania regions.

According to the Civil Protection, weather conditions were expected to worsen, with strong winds sweeping the peninsula from south to north, high waves, rivers overflooding due to torrential rains.

On Monday, this part of Calabria experienced several hours of heavy rain and strong winds although conditions began to improve during the evening.

Officials issued multiple weather warnings with many local authorities urging people not to travel unless absolutely necessary. Schools across Italy were closed as a precaution.

Gale-force winds brought trees crashing down, as locals tried there best to help each to get to safety.

Eleven hikers, up from eight, are now reported to have died in flash floods in Italy’s southern Calabria region, with five people still missing, rescue services said on Tuesday.

Several hiking groups were caught on Monday afternoon by the flooding in the Raganello river gorge in southern Cosenza province, with local authorities saying that 23 people had been rescued.

They said the incident involved two groups of 18 hikers each, with powerful floodlights brought up to allow rescuers to work through the night.

Four men died when a mudslide suddenly hit a villa in the southern Calabria region’s Crotone province. The men were working in an underground room.

Two young people died south of Rome when a tree hit the car they were travelling in, while another person was killed and several injured in the nearby town of Terracina after howling winds brought down scores of slender, tall pine trees.

At the other end of the country, authorities in Venice barred access to the central St Mark’s Square, which was heavily flooded.

Local authorities said the high tide hit a maximum of 156-centimetres in the early afternoon – the fourth highest level ever recorded.

City officials said that up to 75% of Venice was under water.