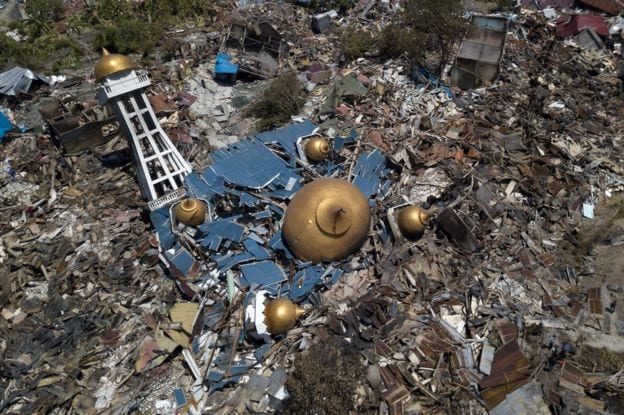 With the ground still shaking from aftershocks, some people are still too afraid to go indoors. The region has been hit by more than 250 aftershocks.

The Mount Soputan in Indonesia erupted on Wednesday, throwing volcanic ash as high as 4,000 meters into the sky, days after an earthquake and tsunami killed more than 1,200 people in the same island.

Authorities have ordered a evacuation order covering a 4km distance, from the peak of the Mount Soputan in North Sulawesi province, citing threat of lava and ash clouds from the eruption,

An agency spokesman for Sutopo Purwo Nugroho  airport said in a statement that Sam Ratulangi International Airport in Manado – the capital of North Sulawesi – is operating normally so far, but it is unclear what the airport will do if teh wind changes.

The eruption comes less than a week after a 7.4-magnitude earthquake and subsequent tsunami killed at least 1,234 people and displaced more than 60,000 people in Central Sulawesi. Mount Soputan is located about 900 kilometers northeast of the quake ravaged region and there were no immediate reports of any casualties from the volcanic eruption.

Time is running out for the survivors

Time is running out for anyone trapped in the rubble of a devastating earthquake and tsunami in Indonesia.  Five days later and the search continues after the Island was devastated by the natural disaster.

The official death toll from the 7.5 magnitude quake that struck the west coast of the island of Sulawesi last Friday stood at 1,234, However the death toll is expected to jump significantly in the next week.

Most of the confirmed deaths have come from Palu, a small city 1,500 km (930 miles) northeast of Jakarta, and losses in remote areas largely cut off since Friday have yet to be determined.

Underlining a growing sense of urgency, President Joko Widodo was due to make his second visit to the disaster zone on Wednesday. He made an initial visit less than two days after the quake struck.

With the ground still shaking from aftershocks, some people are still too afraid to go indoors. The region has been hit by more than 250 aftershocks.

At the Undata Hospital, a stone’s throw away from the dead, a number of patients are being treated on mattresses under a large tarpaulin outside.