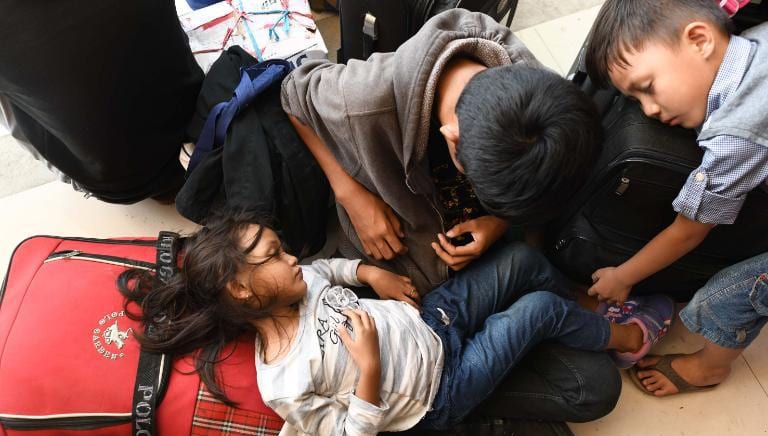 A total of 34 bodies were found by the team, young students who turned to the church for sanctuary buried in the rubble.

As the rescue efforts ramp up following the Tsunami in Indonesia rescuers uncovered the bodies of dozens of students buried in the rubble of a church.  Having pulled the bodies from their landslide-swamped church in Sulawesi.

A total of 34 bodies were found by the team, young students who turned to the church for sanctuary, taking shelter under any kind of safe haven to avoid the ferocious might of the tsunami outside.

As an international search and rescue effort is underway to locate approximately 200,000 displaced people.

A total of 34 bodies were found by the team, young students who turned to the church for sanctuary buried in the rubble.

The discovery adds to the already-high death toll from Friday´s disaster, when a powerful earthquake triggered a tsunami that smashed into the seaside city of Palu.

At least 1000 people are already known to have died, but officials say that number is certain to rise, as the rubble of isolated communities are reached and the scale of the disaster becomes clearer.

Survivors are battling thirst and hunger, with food and clean water in short supply, and local hospitals are overwhelmed by the number of injured.

The Indonesian military is leading the rescue effort, but following a reluctant acceptance of help by President Joko Widodo, international NGO’s have deployed teams on the ground in Palu.

Some survivors clambered through waste and hunting for anything salvageable, some crowded around daisy-chained cutters and power strips at the few buildings that still have power, others queued for water, and thousands search for family.

At the Undata Hospital, more than 100 corpses are still lying in the yard outside the hospital days after the initial quake. The stench of rotting flesh can be overpowering if the wind blows in the wrong direction.

The hospital’s director, said the one facility alone had received more than 200 bodies since the tsunami.

Rescue efforts have been hampered by a lack of heavy machinery, severed transport links, the scale of the damage, and the Indonesian government´s reluctance to accept International aid.

Officials fear the toll will rise steeply in the coming days and are preparing for the worst, declaring a 14-day state of emergency.

The United Nations Office for the Coordination of Humanitarian Affairs warned that there were some 46,000 children and 14,000 elderly Indonesians among those in dire need — many in areas that aren’t the focus of government recovery efforts.

At Poboya — in the hills above the devastated seaside city of Palu — volunteers began to fill a vast grave with the dead, with instructions to prepare for 1,300 victims to be laid to rest.

Authorities are desperate to stave off any disease outbreak caused by decomposing bodies, some of which are riddled with maggots.

My Tweets
We use cookies to help identify your computer so we can tailor your user experience, track shopping basket contents and remember where you are in the order process. WTX News Our Cookie Policy
German extradites Iranian diplomat – over a ‘bomb plot’
Volcano erupts in Indonesia as the search for survivors runs out
To Top
Weekly