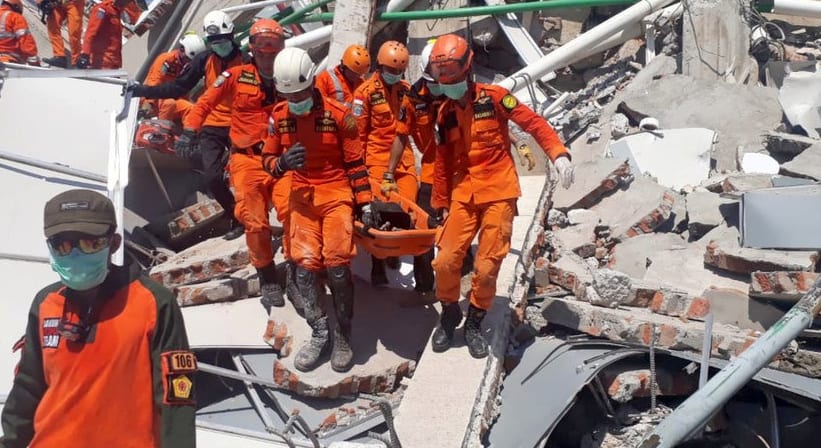 Dozens of people are thought to be trapped alive under the rubble.

Three days after a 7.5 magnitude earthquake and 6-meter-high (20 foot) waves crashed onto the Indonesian island of Sulawesi, the provincial capital of Palu, a city of about 350,000 residents, has been left in ruins.

Authorities started burying some of the 914 people confirmed dead in mass graves which are being dug, one of them will house 300 bodies. As a precautionary measure to prevent the spread of disease. But the actual death toll is expected to go into the thousands. Several thousand people are still within harms ways, trapped under rubble or just in venerable conditions and susceptible to aftershocks.

In Palu, rescuers are awaiting heavy machinery to search the ruins of a hotel and a shopping centre as aftershocks made it unsafe for them to go in.

Dozens of people are thought to be trapped alive under the rubble.

A tsunami warning had been issued after the magnitude-7.5 earthquake hit on Friday, but it is unclear whether it was still in place when the waves hit.

Videos show people screaming as 6m-high waves power over the beach – where a festival was being set-up – sweeping up everything in their path.

Priority will be given to evacuating survivors and allowing aid workers to bring in food and fresh water said Indonesian President Joko Widodo, who visited the disaster site on Sunday.

The European Union and South Korea have offered $1.7 million and $1 million respectively, while the Australian government has said it’s working with Indonesia to identify options for assistance.

An entire city wiped out in a weekend, homes, business and vehicles, perhaps replaceable, but friends, family and communities have all been wiped out along the coast. Washed away by the violent waves. Uprooted trees and pools of water could be seen throughout the area. Roads and bridges were destroyed.

And yet search and rescue are trying to get to the trapped. described by one aid worker in an apt way

“They were asking for help, but they are still there till now. We gave them motivation… so they can have spirit because they are trapped between life and death.”

The rescue operation is complicated as the severely damaged roads impede deployment of heavy equipment to search for victims under the rubble.

The mood and conditions in the devastated city are grim. An entire city is surrounded by death. It is now a fight to survive; hunger, disease, snakes and all kinds of vermin follow such a catastrophe and of course, the aftershocks could last a few more days.

Two days after the quake, as they waited for aid, survivors took matters into their own hands and entered shops, wheeling away trolleys filled with food and water.

A shocking 10,000 refugees are scattered in 50 points in Palu city. And there could be further increases in the number of victims because not all affected areas had been searched yet.

Amidst all the havoc in the city;  About 1,200 prisoners that are now on the run after escaping through walls that collapsed during the earthquake.

Some walls have collapsed and the prisoners got out past guards, while others broke down the main doors.

According to the Ministry of Justice official, the detainees were demanding to see their families after the quake and got angry after their request was turned down. The military is tasked with the manhunt.

With hospitals damaged, injured people have been treated in the open and at least one military field hospital has been set up.

The military has taken over the airport to fly aid in and injured people and other evacuees out. In total, 2.4 million people in Palu and Donggala will need humanitarian aid.