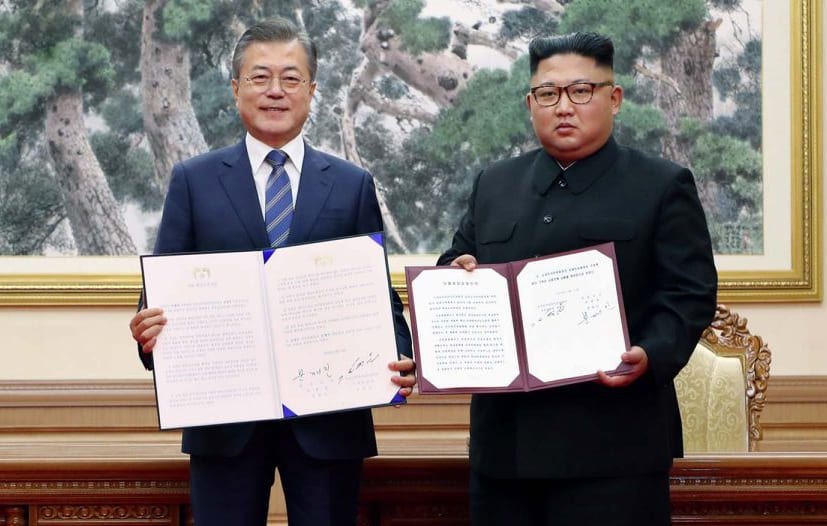 The ongoing process of North Korean denuclearisation, North Korean leader Kim Jong Un has taken a significant step by offering to welcome international inspectors to oversee the “permanent” dismantling of its missile-engine test site. And to shut down its main nuclear complex at Yongbyon.

The latter offer is potentially the biggest move North Korea could make on denuclearisation. However, it is conditional upon the US taking undefined ‘corresponding measures.’

The North Korean offers were made in a joint statement signed by Moon and North Korean leader Kim Jong Un on Wednesday morning, on the second day of their three-day summit in the North Korean capital of Pyongyang.

In addition to the denuclearisation a range of positive inter-Korean initiatives were also announced on the second day of the Inter-Korean summit in Pyongyang, North Korea’s capital.

Speaking at a joint news conference broadcast live in South Korea, Kim, speaking beside Moon, said the two had agreed to turn the Korean peninsula into a “land of peace without nuclear weapons and nuclear threats.”

The statement also said Kim would visit Seoul in the near future. If he does, it would be a milestone – the first time a North Korean leader would have visited South Korea.

The United States said it was ready to resume talks with North Korea after Pyongyang pledged on Wednesday to dismantle its key missile facilities and suggested it would close its main Yongbyon nuclear complex if Washington took unspecified actions.

US Secretary of State Mike Pompeo said he had invited North Korea’s foreign minister to meet in New York next week, with the aim of completing its denuclearisation by January 2021, after a Pyongyang summit between the leaders of the two Koreas.