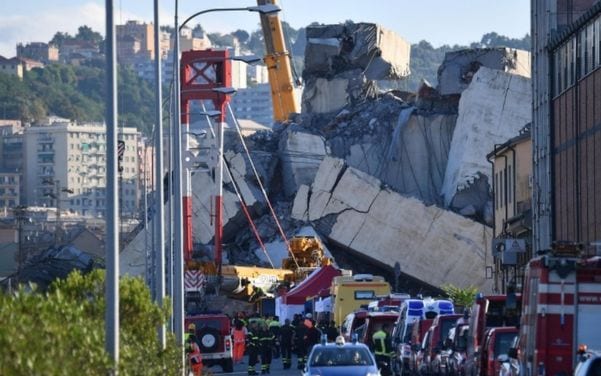 Experts have suggested such a fracture or weakness in infrastructure should have been visible to the authorities. Prioritising public safety and closing the bridge as ‘unsafe’. #Genoa #Italy

Rescuers worked through the night to attempt to account for all of the victims of Tuesday’s Morandi Bridge disaster in Genoa, as the Italian nation mourns the deaths and demands an investigation into why the bridge suddenly collapsed.

Grief for the 39 victims has been mixed with anger that such a vital structure could have simply given way.

Rescuers have resigned themselves to find more bodies but have little hope of finding more survivors, after almost 40 vehicles fell 45m in Tuesday’s collapse.

The cause is not yet known but there have been calls for the heads of the company operating the bridge to resign. Italy’s Prime Minister Giuseppe Conte announced that authorities were working on the theory of “structural failure.”

There could be issues with maintenance, as there are a number of bridges and infrastructure in general that’s reaching end-of-service life.

The Morandi Bridge is also known as the Polcevera Viaduct, was built in 1968. Maintenance was underway by the company in charge of Italian highways.

Experts have suggested such a fracture or weakness in infrastructure should have been visible to the authorities; prioritising public safety and closing the bridge as ‘unsafe’. Except, the neglect had the most tragic consequences as the bridge gave way and sent an avalanche of concrete tumbling toward the ground, overturning cars and trapping people in the rubble.

Locals say that the bridge has had problems for years, and that it was often attended to by repair crews, but the fixes were never long-lasting, and many in Genoa had petitioned the authorities to replace it.

Reports from the scene describe the chaos and destruction left in the wake of collapse. Vehicles squashed like cans of drinks and slabs of torn up tarmac fallen from the bridge.  Italy’s President Sergio Mattarella said rescue efforts must be followed by a “serious and severe examination of the causes of what happened.”

As rescue efforts continue and authorities work to formally identify victims, the city has started two days of mourning.

Flags will fly at half-mast on Wednesday and Thursday, and residents are invited to express their condolences and support for the victims and their families.

The death toll is expected to rise.

My Tweets
We use cookies to help identify your computer so we can tailor your user experience, track shopping basket contents and remember where you are in the order process. WTX News Our Cookie Policy
The Week So Far – Can Bojo Apologise? & The Energy crisis that is forcing people off the grid?
Turkey fights back as it slaps retaliatory tariffs on key US products
To Top
Weekly