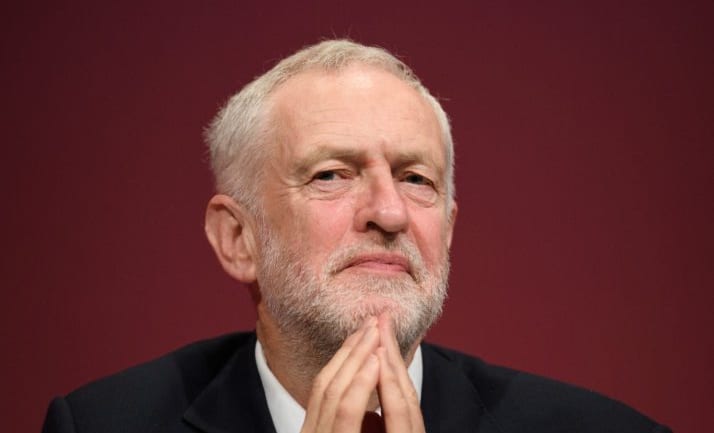 Forensic efforts by pro-Israel groups in the UK have so far failed to uncover a single anti-semitic word written or uttered by Jeremy Corbyn but this does not appear to have stopped the pro-Israel campaign which is obviously aimed at unseating the Labour leader.

Just for the record I’m not a member of the Labour Party having quit back in 2003 over the Iraq War and because of my unswerving support for an independent Scotland I doubt if I’d ever be welcomed back.

However this whole furore over anti-semitism has me baffled. It is right that anyone targeting another individual purely on their faith, regardless of their politics, should be expelled. History and the Holocaust has shown us what happens when Jew hatred is unleashed on a people.

But what I find baffling is this latest onslaught against Corbyn who has apologised for appearing on platforms with people who drew Nazi comparisons with Israel actions – the baffling part comes in several sections. Firstly the parallels drawn between the behaviour of the Israeli State and the Nazis was made by none other than a Jewish survivor of the Holocaust!

Secondly, in the stampede to cry “anti semitism” why are some Labour MPs leading the call against Corbyn failing to acknowledge that the most damning comments came from Auschwitz  survivor Hajo Meyer? He drew the comparisons during a talk in the British Parliament committee room entitled ‘The Misuse of the Holocaust for Political Purposes’.

Thirdly why is everyone conveniently ignoring that the one man who was removed by security from the meeting for making a Nazi salute shouting: “Sieg Heil” was actually part of the heckling Zionist lobby at the meeting?

And finally why did Louise Ellman rush to condemn Corbyn as further proof of anti-semitism within the Labour Party under his leadership, who told the BBC she was “absolutely appalled” to hear about Mr Corbyn’s involvement – but this should not have come as a great surprise – she was there!

Ellman attended the same meeting in the House of Commons back in 2010 and was among those who jeered the holocaust survivor. However no one from the BBC asked her about that or the fact the comments at the heart of the anti-semitism row were made by a Jewish man who survived Auschwitz.

The whole affair is indeed baffling. This meeting was held around the time I had completed a film on a wonderful Holocaust survivor called Hedy Epstein. Her parents perished in Auschwitz and she only escaped as she was sent to the UK as one of the so-called Kinder children.

During my documentary film Searching For The Truth, Epstein, who died aged 92 in 2016, talked about the similarities of her treatment at the hands of German Nazis and the treatment of Israel towards Palestinians today. And who can forget the speech of the late Jewish MP Gerald Kaufman who in 2009 made a powerful speech in the House of Commons accusing Israel of acting like Nazis in Gaza?

Apart from expressly using the term Nazi to compare Israel’s actions during its onslaught of Gaza at the time he also said: “The present Israeli Government ruthlessly and cynically exploits the continuing guilt among gentiles over the slaughter of Jews in the Holocaust as justification for their murder of Palestinians.”

Of course there will be some WTX readers who dismiss this as the ranting of self-loathing Jews and fringe lefties. Possibly, but can they explain sentiments not dissimilar expressed by the Deputy Chief of Staff of the Israeli army Yair Golan who said in a speech delivered at a 2016 Holocaust Memorial event in Israel: “It’s scary to see horrifying developments that took place in Europe begin to unfold here.”

Major General Golan came under intense attack inside Israel but was defended by prominent figures. He was widely believed to be referring to Elor Azaria, an Israeli soldier who was caught on film shooting dead injured Palestinian Abdel Fattah al-Sharif who was lying defenceless on the ground.

He  could also have been referencing the recently appointed Military Chief Rabbi Eyal Karim who, as well as calling for genocide in Gaza, had endorsed rape of “comely Gentile women” if it maintained the morale of Israeli soldiers in wartime!

Another example of drawing on the horrors of World War II under the Nazi regime was given by Israeli minister Matan Vilnai who threatened the Palestinians with a Holocaust and he even used the Hebrew word “shoah” for those in any doubt.

I wonder what those calling for Jeremy Corbyn’s resignation have to say about this? I’m genuinely interested to know because as a non-Jew I’m completely baffled at the furore which has erupted over Corbyn sharing a platform with the likes of Holocaust survivor Dr Hajo Meyer. Can a Holocaust survivor be anti-semitic and if so does that apply also to Yair Golan, Gerald Kaufman and Hedy Epstein?

The late Meyer is the man who drew parallels with the Nazi regime and Tel Aviv. The 85-year-old survivor spoke at the meeting in the House of Commons on Holocaust Memorial Day, 27 January 2010 and was joined by Dr Haidar Eid, who participated in the meeting from Gaza via speakerphone, on the situation in Palestine. Both men compared the dehumanisation of Jewish people in Hitler’s Germany pre-1941 and the dehumanisation of Palestinian people in current day Israel and occupied Palestine.  Throughout the UK tour, Dr Meyer received standing ovations.

The organisers of the event was the International Jewish Anti-Zionist Network (IJAN) that said the tour  provided an opportunity for “many hearing for the first time important truths about Israel’s occupation of Palestine.” In a press statement issued this week IJAN quoted the Holocaust survivor Dr Meyer who said: “My great lesson from Auschwitz is: whoever wants to dehumanise any other, must first be dehumanised himself. The oppressors are no longer really human whatever uniform they wear.“

As I pointed out at the beginning of this article among those present was Louise Ellman MP [then and now, Vice Chair of Labour Friends of Israel] and other leading Zionists including Jerry Lewis [then Vice President, Board of Deputies] and Jonathan Hoffman [then Co-Vice Chair of the Zionist Federation], and Christian Friends of Israel.

IJAN recalled: “Most of them had clearly not come to listen. They barracked both Dr Meyer and Dr Eid, and one of them, Martin Sugarman, had to be escorted out by the Commons security; on his way out he stunned everyone by giving the Nazi salute and shouting ‘Sieg Heil’.”

IJAN added that following the deaths of more than 2,000 Palestinians in Gaza in July 2014, a letter from survivors of the Nazi genocide and hundreds of their descendants, called for “a full economic, cultural and academic boycott of Israel”.  The letter read: “Genocide begins with the silence of the world . . . We must raise our collective voices and use our collective power to bring about an end to all forms of racism, including the ongoing genocide of Palestinian people. ‘Never again’ must mean NEVER AGAIN FOR ANYONE!”  Dr Hajo Meyer was the first to sign on.  The letter was published in the New York Times on 24 August 2014, the morning after he died.

IJAN, which describes itself as an international network of Jewish people opposed to imperialism, militarism, apartheid and genocide said the event was “a coming together of many communities which have faced dehumanisation, racism and genocide”.  Speakers were Armenian, Bangladeshi, Irish, Native American, Roma, Rwandan, Tamil, as well as people with disabilities, and a speaker on the Slave Trade from Africa to the Americas and the revolution which ended slavery in Haiti.

In its literature IJAN says it supports “the liberation of the Palestinian people, and the right of return for those driven from their homes and their land by Israeli occupation and ethnic cleansing”. The group has active chapters in Argentina, Canada, France, Spain, the UK and America.

The meeting and national tour was part of a joint enterprise with the Scottish Palestine Solidarity Campaign. On its website SPSC is highly critical of Corbyn for “crumbling” under pressure. Recalling the event in a statement it reports: “During his talks Hajo Meyer movingly described his experiences in Nazi-occupied Europe; how the regime dehumanised him and other Jews, and drew compelling parallels between his life before 1941 and Israel’s progressive dehumanization of Palestinians up until the present day. Dr Meyer argued at each meeting that “Zionism was the polar opposite of Judaism”, ie a brutal programme of settler colonialism contrasted with the ethical power of one of the great world religions.

“Dr Meyer was widely quoted saying: “My great lesson from Auschwitz is whoever wants to dehumanise any other must first be dehumanized himself. The oppressors are no longer really human whatever uniform they wear.” Dr Haider Eid spoke from the Gaza Concentration Zone, where most of the people are refugee families from waves of Israeli ethnic cleansing and Israel has carried out many massacres over the years.

“He spoke a year after Israel’s massacre of 1,400 Palestinians, a mass killing the UN Goldstone Commission concluded was “a war crime and possible crime against humanity”. Crimes against humanity were first prosecuted against the Nazi leadership at Nuremberg after the end of WWII. Dr Eid suggested that Nazi-type bestiality was not consigned to history: “The world was absolutely wrong to think that Nazism was defeated in 1945. Nazism has won because it has finally managed to Nazify the consciousness of its own victims”.

The whole affair and furore around this meeting in the House of Commons is baffling – why would a row erupt over anti-semitism a full eight years later … especially when one of the Corbyn’s biggest critics was sitting near Labour Friends of Israel MPs giving Nazi salute and shouting “Sieg Heil?”

Before joining in the stampede to unseat the Labour leader perhaps it would be wise to read beyond the headlines of the right wing press and the soundbites of MPs who either suffer from political amnesia or are setting out to mislead the public!