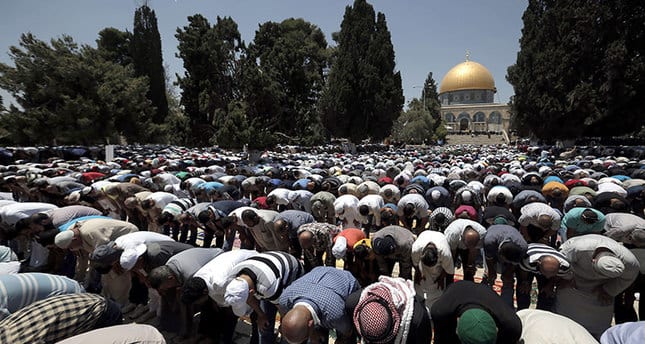 I thought that headline would grab your attention! First and foremost no one’s just made me a mufti and I’m not an Islamic scholar so after reading this I urge you to go out and seek corroboration and knowledge from men and women who truly know and love their Islam.

Secondly I would ask you to check out the committees of those mosques where women are forbidden from entering. I bet the decision taking is made by men and that those men have their roots in countries which were once colonised by the British. There’s a thesis in there somewhere but let’s focus on the issue of men-only mosques for today.

The thorny subject was brought to my attention by Egyptian scholar Sheikh Fadel Soliman who I first encountered in New York and then in Cairo when I was brand new to Islam. He introduced me to the then Grand Imam Sheikh Mohamed Sayyid Tantawi, the Rector of the famous Al Azhar University in Cairo, and the leading cleric in Sunni Islam worldwide.

At our meeting Sheikh Tantawi went to shake my hand and I drew back amid a few gasps from those in our immediate circle. I was still wrestling with the notion of shaking hands of the opposite sex when, astonishingly, the late sheikh accused me of extremism as I refused his hand. Sheikh Fadel interjected and corrected the man widely considered to be head of the Arab sunni world, again more raised eyebrows but he diffused a tense situation.

Ever since then we’ve become great friends and he is someone I’ve relied upon over the years when faced with challenging dilemmas and questions about Islam simply because he has shown himself to be a man who speaks without fear or favour. It’s no use consulting a sheikh who will tell you simply what you want to hear.

The ‘handshake’ thing has troubled me on and off for many years but I’ll return to it another time. I want to focus on the far more pressing phenomenon which is men-only mosques. It is something which troubled me within days of embracing Islam and is virtually unheard of in the Arab world although common in parts of Africa, Asia and Europe.

When I lived in London my nearest place of prayer was the Islamic Centre in Soho. On arrival I was told I could not enter. I created a fuss and the imam at the time (it was around 2003) said the same thing. As I was kept at the door I told him that I knew he was wrong and I would go away, seek knowledge and return to challenge him again. I told him that there was no such thing in Islam as a men-only mosque and I was sure of this – as a feminist and a lifelong supporter of women’s rights there’s no way I’d embrace a faith which sidelines one gender.

Now, more than 15 years on, I stand by my insistence that there’s simply no such thing as a men-only mosque and there never has been. It is a concept born out of misogyny and while some of you may wave your hands dismissively and accuse me of being on a feminist trip, stop right there. The truth is your jumma prayers are invalid if you pray in a building where Muslim women are barred. Don’t take my word for it – ask a scholar free of constraints and not someone from the oil-rich schools of scholars for dollars.

Egyptian-born Sheikh Fadel Soliman from The Bridges Foundation, who has a Master’s degree in Shariah, has been investigating the subject for some time. The problem was also resurrected by another friend of mine Imam Ajmal Masroor whose wife and daughter were refused entry to a London mosque quite recently.

Both these men stand up fearlessly for women’s rights in Islam and as I say, I’m proud to count them among my brotherly friends. “Men-only mosques are a bidah as they violate a clear instruction by the Prophet (pbuh) ‘Dont you ever prevent the female servants of Allah from attending mosques’. He forbade us from making a single gender mosque,” says Sheikh Fadel.

He also sought clarification from another hugely respected authority Sheikh Muhammad al-Hassan Walid al-Dido al-Shanqītī who runs a respected educational centre in Mauritania. Not only did the sheikh agree he went further and declared places where women are barred from worship as not even mosques! “The condition for any place to be considered a mosque is that no one can be disallowed to enter and prayer freely. So, if people set out to make a mosque for one type of people only say, for doctors, or rich people, or white, or black, it is not a mosque. Call it whatever you want; it’s not a mosque,” explained Shk Soliman.

And so what of these men-only mosques and their status in Islam? “The jummah is invalid” declares Shk Soliman. This is huge news, it’s seismic when you consider in the UK around a third of the mosques are men-only! It’s something the Muslim Council of Britain, once sinking in a swamp of its own misogyny, is trying to grapple with today as it finally realises we women are half the Ummah and we gave birth to the other half!

The solution is simple. Lift the ban and then set about turning mosque committees into areas where the decision makers and takers are split only by gender. Let’s end the days of men-only mosque committees which serve no one especially the community and consign to history those fake mosques where women are banned.

It is a message I gave in South Africa recently which was welcomed by many of the women I met in Johannesburg and Durban but sadly not all of the men were as enthusiastic. Goodness knows why since there’s not a Muslim man alive who would challenge the word of God and yet, the Qur’an makes it clear mosques are houses of worship for all.

As I say, don’t take my word for it but if you pray in a place where women are banned then I’d be seriously concerned. If your jumma prayers are invalid then how do you get back all those lost years? I don’t know the answer but if I was a man praying in a men-only mosque I’d be very concerned.

There are three floors in which to worship at the Soho Islamic Centre, surely one can be set aside for women? Next time I go I will demand my right as a Muslim and now I have the knowledge to stand up to the misogynists who should take heed.

And while I’m on with it, for those mosques where women are accommodated ask yourself this: Can we do better? I am sick and tired of going to mosques where the sisters’ rooms are dark, damp, grubby and unclean. This is a terrible advert for Islam. I’m not going to name and shame the mosques and prayer rooms here – their committee members know fine well what I am talking about!