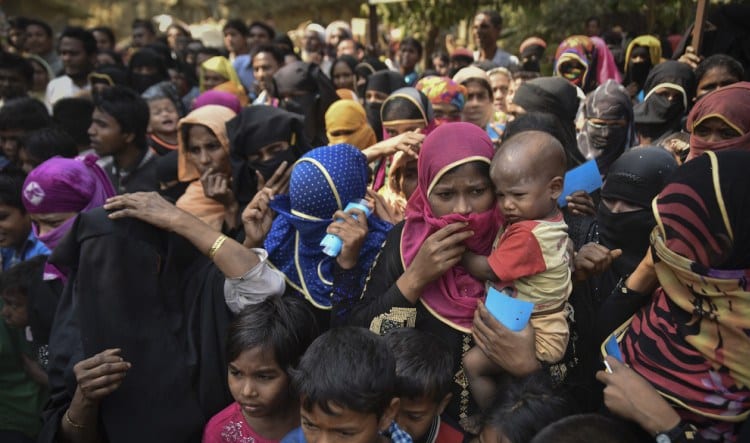 It involved a heavily pregnant young girl who attempted to abort her unborn baby in an act which cost both their lives. A doctor found a stick inserted into her uterus and the infection it and the wounds caused were so severe neither could be saved.

The young girl was apparently trying to “protect her family’s honour” because she was
unmarried. The fact that she was a victim of gang rape earned her little or no sympathy and one can only imagine the turmoil in her mind as she tried to get rid of the unwanted foetus.

This tragic girl is not alone for thousands of young girls and women are about to give birth in the refugee camps on the Myanmar-Bangladesh border now that we are approaching the ninth month of their dramatic exodus from Rakhine State last August.

We are in the Islamic holy month of Ramadan and Eid babies are normally seen as a great blessing across the Muslim world – but don’t expect any celebrations over the impending baby boom in the makeshift maternity camps where the results of mass rape are about to make an entrance into the world.

Thousands of babies are expected to make their entrance soon and while de facto leader Aung San Suu Kyi still calls the stories of organised rape carried out by her fellow Burmese ‘fake news’ perhaps she should go along to the camps and see for herself as girls as young as 12 go into labour.

The disgraced Nobel Peace Prize winner Suu Kyi has called for evidence and proof of mass rape, but she need look no further than the maternity wards being set up by aid agencies who predict 130 live births a day for the rest of the year.

Even now, though, her government still refuses to give full access to NGOs, journalists and politicians in Rakhine State where some of the worst crimes against humanity took place against the Muslim minority.

ROHINGYA: The most wronged people on the planet

Some journalists have been detained for reporting what they see and Reuters reporters WaLone and Kyaw Soe Oo remain in prison because of the photographic evidence they collected of villagers being lined up and executed.

According to Canadian medic Dr Fozia Alvi, who has volunteered in the camps and returns in August: ‘The gang rape by Myanmar soldiers was systematic, organised and widespread. Now the babies are arriving with mothers as young as 13 and 14 giving birth in makeshift tents.”

“Lots of women have tried to abort these babies because they don’t want to have children fathered by the soldiers who butchered their own fathers and husbands.”

She concurs that Suu Kyi needs to visit the camps and meet these woman and young girls. “It is a shame on humanity that she is denying the endless evidence of rape.”

South African lawyer Shabnam Mayet from NGO Protect the Rohingya told me: ”Having
taken the testimonies of victims of rape and gang rape there is no doubt these brutal attacks perpetrated by the military and extremist Rakhine Buddhists was pre-planned and aimed at terrifying the Rohingya into fleeing.”

The babies born in the squalid camps of Bangladesh in the coming weeks, she added, will
provide the living evidence of the extent of the mass sexual violence unleashed on Rohingya girls and women during the so-called “military clearance operation” last August.

And still the increasingly toothless UN has yet to call this disaster for what it is: a genocide. Just a few months ago I joined a team from Protect the Rohingya on a visit to the camps in order to collect sworn statements to be used in any court in the world where International Jurisdiction is recognised.

We were expecting the international community to come together and act swiftly on this
evidence. We are still waiting. The harrowing statements and sworn affidavits are being used, but only in individual actions.

The scale of sexual violence against the Rohingya was obviously pre-planned but the
genocidal rape has yet to be really addressed by the UN Security Council despite the
widespread condemnation from the international organisation’s Secretary-General,
governments and global civil society.

If the UN wants proof of genocidal rape it is being delivered right now, by girls as young as 12 in the Rohingya refugee camps. There’s your proof, UN! Now go and get the war criminals.