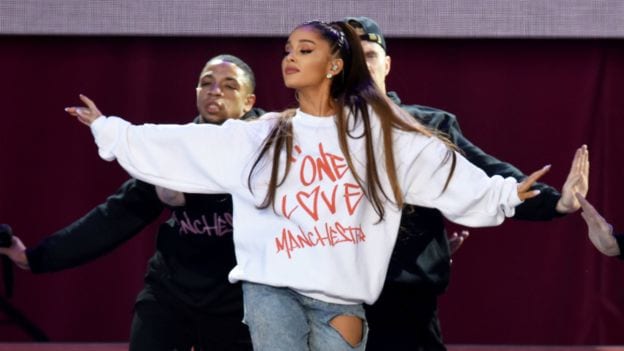 “Thinking of you all today and every day. I love you with all of me and am sending you all of the light and warmth I have to offer on this challenging day.” #Ariana Grande #manchesterArena

Ariana Grande has paid tribute to the victims of the Manchester Arena terror attack a year after 22 people were killed in the bomb blast.

Twenty-two people were killed and hundreds injured when a suicide bomber detonated a bomb at the end of one of Ariana Grande’s concerts on 22 May 2017.

Greater Manchester mayor Andy Burnham tweeted his support for everyone affected by the explosion.

“Today we come together, we remember each of the 22 people whose lives were taken.”

Today we come together, we remember each of the 22 people whose lives were taken & we re-commit to supporting their families & all affected. pic.twitter.com/8CCp8Vwf5B

Along with the 22 people who were killed, more than 800 others, many of them children, were either physically or psychologically injured, according to police. The youngest person to die was just eight years old.

Ten thousand people are expected to join a mass singalong in Manchester on Tuesday night to mark the first anniversary of the Arena attack.

At 2pm, the Duke of Cambridge, Prince William, and the prime minister, Theresa May, will pay their respects at the national service of remembrance.

The invitation-only service at Manchester Cathedral will be attended by the families of those who lost their lives, the injured, first responders, civic leaders and national politicians.

It will be broadcast live on a big screen in nearby Cathedral Gardens as well as at York Minster, Liverpool Metropolitan Cathedral and Glasgow Cathedral.

Heading to Manchester today to pay tribute to those who lost their lives in the atrocity one year ago, including young Eilidh MacLeod from Barra. I hope today’s memorial service brings some comfort to the bereaved and to those who are still living with their injuries.

Events include a service at Manchester Cathedral at 14:00 BST and a sing-along vigil.

And at At 10.31pm, bells will ring out from the city’s Town Hall, St Ann’s Church and St Mary’s RC Church to mark the moment when the attack took place 12 months ago.