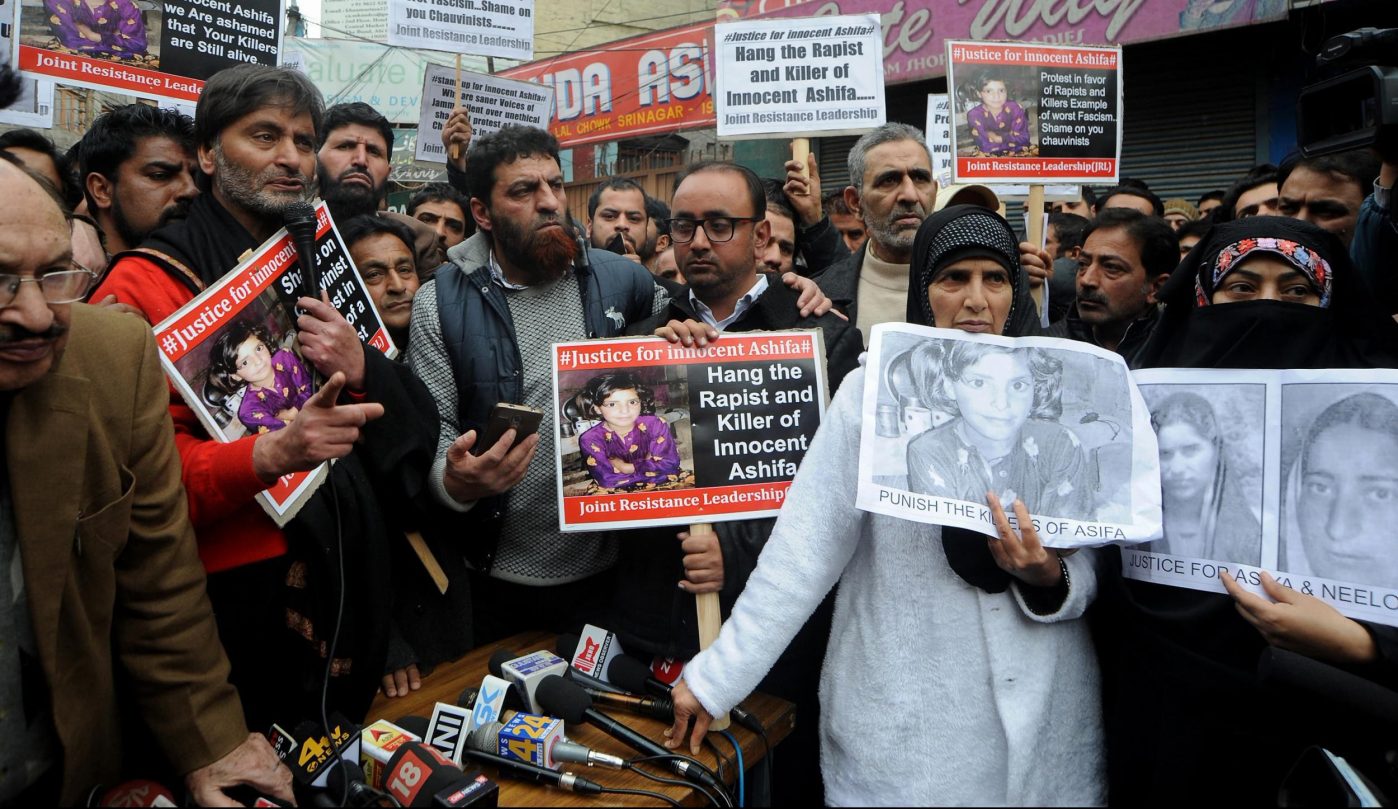 Every 15 minutes a woman somewhere in India is raped and the crime has now become so normalised it barely registers as news these days. Shockingly, even gang rape in India is common, predominantly in poor rural villages where the elite abuse their privilege.

Only when a case comes to public attention that is so shocking in content and detail, are we reminded of India’s huge problem with its violent treatment of women and children and how it views the female gender.

The shocking story of eight-year-old Kashmiri child Asifa Bano is one such case that also has the extra dimension of the toxic sectarianism of Hindu nationalism.

The little Muslim girl was targeted because of her faith in what has been described as a well-organised act by a pack of Hindu extremists. However don’t be mistaken into believing the men accused of her rape are rogue, criminal figures – one is a retired government official while two are serving police officers.

Perhaps, more alarmingly, when police in Jammu Kashmir arrested the men a mob of Hindu nationalists threatened the few honest policemen and lawyers who were trying to uphold the law and seek justice.

However, even the profile of the mob was unusual in as much as those who rampaged through the streets in defence of the arrested men. It included government ministers, lawyers and women waving the national flag plus supporters of the two major Indian parties, Congress and the Bharatiya Janata Party (BJP) – the party of Prime Minister.

The PM Narendra Modi is in Britain this week for the Commonwealth heads of government meeting of which India is a member.

He has yet to give any meaningful comment about Asifa who was part of a nomadic Muslim tribe that herds its cattle 300 miles twice a year in search of pasture. In January the nomads move from high up in the mountains to Jammu to graze their animals. Earlier this month little Asifa went one evening to bring back grazing horses but never returned.

Modi does not acknowledge the Rape

From their investigations police believe she was targeted by a group of men who abducted and imprisoned her for a week and during her incarceration, she was drugged and starved of food while the paedophiles took turns to rape her in a Hindu temple.

Spokesperson of India's ruling party thinks most countries don't allow citizens to criticise the elected PM or President!
Just. Wow.
(Also she belongs to the party whose armed thugs beat the crap out of you, threaten rape on Twitter if you criticise their Supreme Leader PM Modi) https://t.co/FnhMdvbjuS

The crime of the gang rape in India was well organised and was partly designed to drive the nomadic tribe from the predominantly Hindu village of Rasana.

Modi’s apparent lack of concern has prompted senior academics, union leaders, NGOs and other senior members of the Indian community in the UK to express their shock at the “gut-wrenching violence against women and children in India being defended by politicians of Modi’s ruling Hindu rightwing party, the BJP.”

Meanwhile, in Unnao in Uttar Pradesh, ruled by the BJP’s notorious hate preacher Yogi Adityanath, a 16-year-old girl was raped and when her family protested after almost a year of inaction by the police, her father was brutally assaulted and arrested on a false case and died in police custody.

Apart from promising justice on April to India’s  “daughters” Modi has refused to utter the word “rape” let alone recognise the role of his own party supporters in perpetrating and celebrating such crimes.

If we had a government with a moral compass we might expect Modi to be put on the spot while in the UK this week but, instead, we’ll have to leave it to the British media to put the Indian PM in a corner by firing volleys of awkward questions about his views and that of his country.

Asifa’s death must not have been in vain.