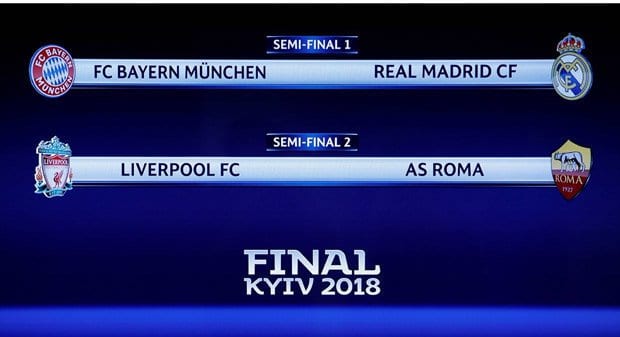 The Champions league draw was announced today and Defending champions Real Madrid will face Bayern Munich in the semi-finals of the Champions League while Liverpool play AS Roma in a repeat of the 1984 final.

Cristiano Ronaldo’s Real will travel to Bayern’s Allianz Arena for the first leg on April 25 as the Spanish giants go in search of a third successive European crown.

Jurgen Klopp’s Liverpool side will host Roma at Anfield on April 24 in their first match.

The Liverpool-Roma tie pits Mohamed Salah, who has scored 39 goals in all competitions already this season, against his former club. “Looking forward to seeing you again,” Roma tweeted about the Egyptian striker.

This year the quarter finals have produced some of the most exciting football and dramatic finishes.

Real, who have won the competition 12 times, reached the semi-finals by fighting off a remarkable Juventus comeback as Ronaldo scored a late penalty to earn a 4-3 win on aggregate.

Roma produced one of the most remarkable comebacks in Champions League history to knock out Lionel Messi’s Barcelona with a 3-0 victory in the Italian capital that gave them an unexpected win on away goals over the two legs.

Bundesliga champions Bayern, who named their former player Niko Kovac as their next coach minutes before the draw, eased past Sevilla in their quarter-final.

Bayern’s sporting director Hasan Salihamidzic said despite losing to Real in the 2017 quarter-finals, they held no fear for the Bavarians.

“They are formidable opponents. We were knocked out by them last year and we want to do better this year,” Salihamidzic said.

“I’m optimistic. We have great respect for them but we’re not afraid.”

“It is truly historic to win two finals in a row and so obviously the prospect of reaching another final is an enormous source of motivation,” he said.

“We’ll see what we are capable of, but we’re confident.”

Liverpool beat runaway Premier League leaders Manchester City 5-1 on aggregate to set up their meeting with Roma. The English side have happy memories of the 1984 final, played in Rome’s Olympic Stadium. They won 4-2 on penalties after the match finished 1-1 in extra-time.

Klopp said: “I tried to think about what I feel, but it was not that I thought ‘Thank God not Bayern, thank God not Real Madrid, yippee Roma’ or the other way around.

“It is just the draw and I know it is very exciting, but it is good because the most important news is we are still in the competition.

“But if anybody thinks this is the easiest draw then I cannot help this person — they obviously didn’t see both games against Barcelona.”

Roma’s sporting director Monchi said: “This seems the perfect opportunity to achieve the happiness that we couldn’t get all those years ago.

“But we’ll have to take care of our game and do what we did against Barcelona.”

Liverpool will host Roma on Tuesday, 24 April and Bayern will host Madrid on the 25th. The second legs will be played in Madrid on May 1 and in Roma will host Liverpool the following day.

Kiev will host the final on May 26.