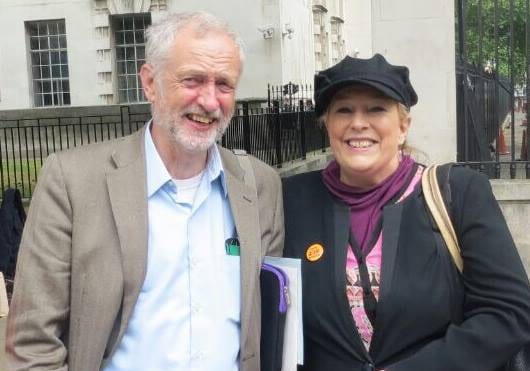 The Week So Far with Yvonne Ridley- Russia, Facebook, Corbyn and the BBC – TWSF

Just for clarity here’s a nice image of the Labour leader looking all jovial and cuddly and not at all Stalinesque … but who’s the dodgy looking Bolshevik on his left?

BBC gets all bolshie over Comrade Corbyn

When you’re caught red-handed doing something you really shouldn’t then the best damage limitation exercise is to admit it and move on. This is something someone should’ve told the BBC executives at Newsnight which continues to deny claims it doctored a photograph of Jeremy Corbyn to make him look more, erm Comrade-like!

Newsnight is reeling from accusations of “extreme bias” for using a Corbyn image that some eagle-eyed social media citizens reckon has been photoshopped.

Leading from the front (as usual) was journalist Owen Jones who gave Newsnight a tongue-lashing which left presenter Evan Davis a bit dazed and confused like a rabbit trapped in the headlights. The brouhaha was based on the Salisbury Spy Poisoning story as portrayed by the BBC 2 show which used an image of the Labour leader making him look like a “Soviet stooge”.

Unstoppable Owen raged: “The media framing has been a disgrace and I have to say that includes your own programme. Yesterday the background of your programme you had Jeremy Corbyn dressed up against the Kremlin skyline, dressed up as a Soviet stooge. You even photoshopped his hat to look more Russian. People should complain to the BBC about that kind of thing.”

When you’re caught red-handed doing something you really shouldn’t then the best damage limitation exercise is to admit it and move on. BBC pushing propaganda

Corbyn was apparently depicted wearing a Russian Bolshevik cap against a backdrop of Moscow’s Red Square while Ayesha Hazarika, former special advisor to Ed Milliband, and Corbyn ally Chris Williamson MP, responded to the UK government’s reaction to the nerve poisoning attack on Russian double-agent Sergei Skripal and his daughter Yulia who were both poisoned with “military grade” Novichok nerve agent earlier this month.

“Newsnight didn’t photoshop a hat,” blasted the show’s acting editor Jess Brammar who then went on to give us all a master class in TV graphics. She couldn’t have done better if someone had given her a Spear and jackson digging spade! “.. some detail might also have been lost with it going through the screen and then being filmed back through a camera, again the standard effect on images on that big back panel”. Err Jess, love, stop digging.

Just for clarity here’s a nice image of the Labour leader looking all jovial and cuddly and not at all Stalinesque … but who’s the dodgy looking Bolshevik on his left?

Show us the evidence

Let’s be clear on the so-called Russian poisoning case. As yet, as far as I can see, British Prime Minister Theresa May has yet to submit conclusive proof before us and the result of the world that Russia is guilty of using a nerve agents in Wiltshire. At one time we used to believe every statement coming out of Downing Street but Tony Blair, the Iraq War and WMD changed all of that.

Blind patriotism at this stage serves no purpose so I would join in with other sceptics and tell the British Government to prove beyond reasonable doubt that Russia was behind the nerve agent attack on Russian double agent Sergei Skripal and his daughter Yulia. The one piece of good news to emerge so far is that Detective Sergeant Nick Bailey was released from Salisbury District Hospital on Thursday afternoon three weeks after what he describes as “a surreal experience”.

I also have a degree of sympathy, up to a point, with Alexander Yakovenko, Russia’s ambassador to the UK, who has described UK Foreign Secretary Boris Johnson’s comparison of this 2018 World Cup to the 1936 Nazi Olympics as “unacceptable” bearing in mind that 25 million Soviets paid the ultimate price fighting Hitler’s Germany as an ally of Britain during World War II.

The undiplomatic language between Russia and Britain has now descended into trading insults and a war of words which does neither country’s reputations any good. If British Prime Minister Theresa May continues on this destructive course she will find herself alienated and Britain alone for although many European countries rallied to support the UK over the nerve agent attack that support is clearly not unconditional.
Both sides need to calm down and someone should send Theresa May a copy of Sun Tzu’s The Art of War. This masterpiece of strategy cautions: “Keep your friends close, and your enemies closer.” At the moment she is looking like an unprotected fool poking a stick in a hornet’s nest. As far as I can see at the moment this is not going to end well.

Facebook chief Mark Zuckerberg has finally broken his silence on the Cambridge Analytica data scandal by posting an explanation online and giving interviews to some media outlets. I set out on my career more than 40 years ago with a portable typewriter so I’m still lagging behind in terms of technology.
They were blissful days – I never lost a 1000-word feature, suffered a frozen screen or lost data or sent an offensive electronic message to the wrong person by accident! Apart from running out of ink or snapping a typewriter ribbon, life was indeed very simple.
Like many Facebook users, I’m still not full aware of the implications of this scandal although Zuckerberg has admitted: “We have a responsibility to protect your data, and if we can’t then we don’t deserve to serve you.” Apparently more than 50 million of us had our profiles harvested by an app for data, which was then passed the information on to Cambridge Analytica.
Zuckerberg says FB will implement a new tool at the top of the News Feed that will show users which apps they are using and give them an easy way to revoke permissions to data. Sorry pal, but I’m none the wiser other than you’ve given some half-hearted apology and that there’s been some sort of “major breach of trust.”
Some people are saying that this all helped US President Donald Trump get elected but I’m still not clear how. But if Zuckerberg’s FB has such influence and he wants to make amends, perhaps he can make it up to Scottish users in particular by swinging independence for us next time a Referendum is held and then I’ll forgive and forget.

News is coming in of how an Alsatian dog was whipped “into a frenzy” and plunged into icy waters in a locked cage for a scene in a movie. People for the Ethical Treatment of Animals (PETA) has released a video which shows the animal in a cage being spun around by a crane before being thrown into a lake.

An unnamed whistleblower shot the footage on November 28 last year on the set of Crazy Alien, a Ning Hao film which is currently listed as being in post-production.

Glee actor Matthew Morrison, who stars in the movie, said he has called the producers to “express his outrage” at the incident.

As an animal lover I hope the full force of the law is brought down on those responsible although I don’t think I’d protest too much if the eye-for-an-eye rule of law was applied in this case on the perpetrators.

I worked on the set of the blockbuster TV series Outlander and can tell you the animals on set were treated with huge respect and care arguably better than some of the human extras.

There is absolutely no need for this sort of cruel treatment on or off a film set in the 21st century.

Struth Ruth … press the off button!

So Scotland’s Conservative leader Ruth Davidson has called for television news network Russia Today (RT) to be banned in the UK for peddling “soft sell propaganda”.

Whatever you think of RT most people have the ability to press the ‘off’ button on their televisions if they don’t like what they’re viewing and what we don’t want is some ranting, harpy trying to make that decision for us, especially in our own homes. This is the sort of Big Brother censorship you get in a totalitarian state and if this is the future then I’ve found another reason not to vote for the Conservative Party.

Of course what Davidson fails to mention is her real motivation and that is every Sunday RT broadcasts a show hosted by the former first minister and SNP legend Alex Salmond. In an article Davidson expanded on her rant in that politically independent Sunday newspaper known for its unbiased open views … The Sunday Telegraph! ‘Nuff said!

If the Egyptian regime has nothing to hide in its treatment towards the first ever democratically elected leader of its country, then one has to ask why it is reluctant to give access to British parliamentarians who want to visit Mohamed Morsi.

Crispin Blunt MP, says that former Egyptian President Morsi, who was ousted in a military coup in 2013, is “not an ordinary prisoner” and warns that if Morsi dies in prison, the consequences will be greater than if the victim was anyone else.

Blunt, who heads Westminster’s Foreign Affairs Committee, said that a request by a group of British parliamentarians to be allowed to visit Morsi in prison has not received any response from the Egyptian Embassy in London.

So Vladimir Putin romped home in a landslide victory in the Russian presidential elections … what a surprise! By the way, did I ever reveal that the Pope is a Catholic and the Kennedys are gun shy? I could also write about what bears get up to in the woods, but that’s enough revelations for one day.

The Week So Far with Yvonne Ridley- Russia, Facebook, Corbyn and the BBC – TWSF