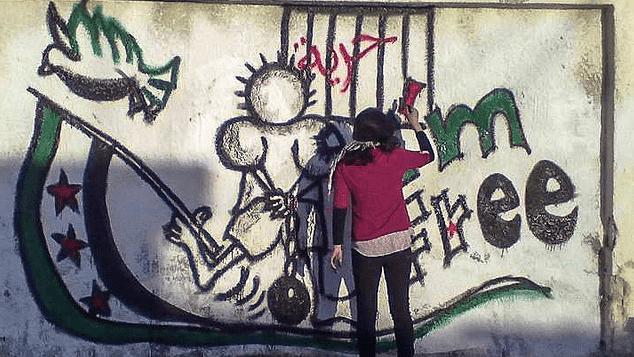 Seven years ago the Syrian war began but what triggered this seismic event?

Seven years ago the civil war in Syria erupted. It was during the height of the Arab Spring but this was probably the most reluctant revolution of all and could have been avoided if only Bashar al Assad had intervened when his people asked.

Despite what Damascus and their stooges will have you believe, the war erupted after eighteen 11-year-old Syrian boys scratched some graffiti on a partially-collapsed wall in Arabic saying “the regime will fall.”

Just as hard-up Tunisian fruit seller Mohammed Bouazizi is credited with igniting the Arab Spring with his self-immolation, this long forgotten, single act of childish vandalism lit the touch paper of the Syrian Revolution. Of course the hard left from East to West would rather you forget about this.

Instead they want you to believe that crazed Islamists, the CIA, Mossad and Uncle Tom Cobley and all planned, plotted and unveiled this brutal, unrelenting war. Be in no doubt, the majority of the pro-Assad lobby are hard-line fundamentalist, religion-hating secularists who have no room, not even a square inch, for religion in their world; not for themselves and not for anyone else.

I crossed the length and breadth of Syria shortly before the revolution and saw most communities, Christian and Muslim alike, holding tight to their faith. But let’s return to the 18 boys at the beginning of this story because it is vitally important that we all remember exactly how the revolution in Syria began.

As I said, it did not begin with CIA interference, nor an influx of foreign fighters, Al-Qaida, rebranded weapons from the West, NATO or a global call across the Muslim world for jihad.This was a reluctant revolution, a revolution forced on the people by the acts of an evil, malevolent regime.

The villain who helped ignite the revolution was a brute of a man called Atif Najeeb, a cousin of Syrian President Bashar Al-Assad, who saw to it that all 18 boys were arrested after their homes were raided by armed police, the military and the ubiquitous security officials.

The news swept Dar’a, in the south-west of Syria less than six miles from the Jordanian border, and the parents and their relatives gathered outside his office, but Atif Najeeb along with Faisal Kalthoum the governor of Dar’a, refused to meet any one of them.

For four days the families waited but not a single scrap of news came out about the fate of their sons. Eventually, a delegation made up of family members, local imams, the local headteacher and other dignitaries assembled only to be told by Najeeb: “My advice to you is that you forget you ever had these children. Go back home and sleep with your wives and bring other children into the world and if you can not do that, then bring your wives to us and we will do the job for you.”

The shock and outrage spread across the region with ordinary Syrians from Dayr Al-Zawr, Idlib and Homs taking to the streets. While some did suggest that it was time for a revolution, the families kept to only two demands: the return of their children and the sacking of the governor for his crude and inflammatory remarks.

Eighteen days later, when it was clear that the parents and families would not be appeased until their children were returned, the boys were released. Their condition was pitiful and shocking; all were traumatised beyond recognition. All had had their fingernails torn off. One had lost an eye while several had fractured skulls and all had at least one broken limb. Today, those boys still bear the whip marks and scars on their bodies which bear testimony to the brutal nature of their detention and torture. Several of them still have nightmares recalling the screeches and screams of their fellow inmates.

Far from calming the situation, the physical evidence that the boys had been tortured enraged the people of Dar’a who made their own two demands: the dismissal of the governor and justice delivered to those who had done such wicked things to the boys including Atif Najeeb and his torture squad.

The victims of the Syria war. Receiving medical treatment in a makeshift camp. #convoyofconscience

Seven years on you can see how modest those demands were but the arrogance and brutality of the Assad regime refused to take heed. Now we’ve seen Assad drop chemical weapons, barrel bombs and more on his own people with the help of his friends in Tehran and Moscow. It could have all been avoided, all the bloodshed, torture and brutality but it wasn’t.

It’s also worth bearing in mind that as news of the atrocities in Dar’a and other Syrian cities reached Damascus some senior officers in the military could no longer stomach what was being done in their name. They defected from the regime and formed what is now known as the Free Syrian Army. It’s not an army of outsiders; it was founded by Syrian officers and grew in popularity and prominence with the media because of its name.

Yes there are foreign fighters in the conflict, they come from all over the world including Iran and Russia; there are all sorts of proxy wars going on inside Syria today and almost certainly you can throw into the mix jihadists, money from Arab countries to fuel the war, subversive tactics by Arab countries to undermine any signs of democracy, infiltration by the CIA and Mossad, just about everyone, in fact, bar the Free Wales Army.

How it will all end remains to be seen but don’t allow anyone to rewrite the history of the start of the Syrian Revolution. The Graffiti Boys should never be forgotten and one day when it is all over their names should go up on another wall in Dar’a – a wall where their names can be carved with pride and serve as a notice to everyone how a simple act can escalate out of control by those who want to fan the flames of war.