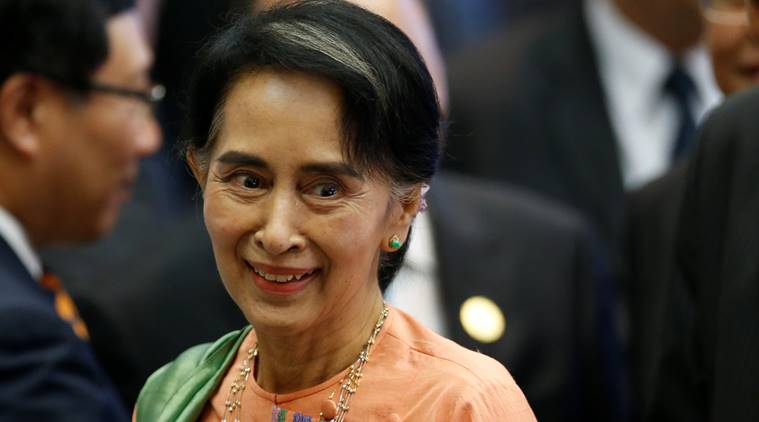 Aung San Suu Kyi, once regarded as the acceptable face of the brutal Myanmar regime, has cancelled a public appearance in Australia citing ill health as the reason.

However it is more likely the controversial Nobel laureate is running scared after fighting an attempt to have her privately prosecuted in Australia for crimes against humanity.

Lawyers have lodged an application at a court in Melbourne to charge the 72-year-old de facto leader of Myanmar with forcing more than 650,000 Rohingya Muslims out of their homes. The prosecution – which requires the consent of Christian Porter, the Attorney General, to go ahead – alleges Suu Kyi is criminally responsible for the military attacks on the Rohingya since August 25 last year.

Although the Attorney General is expected to rebuff the attempt citing diplomatic immunity, I understand lead lawyer Daniel Taylor will lodge an appeal against any such decision in what has become an extremely fast moving story around the globe.

Just hours before she arrived in Australia to attend a three-day summit of the Association of South East Asian Nations (ASEAN) a meeting was being convened in the British Parliament to discuss the options open for such a prosecution. The meeting was chaired by Stephen Gethins MP, a member of the parliamentary Foreign Affairs committee which, just days ago, had been refused visas to travel to Myanmar to investigate allegations of genocide and war crimes.

What none of us realised at the time, was that Melbourne lawyer Daniel Taylor and several other advocates were beavering away in preparation for Suu Kyi’s arrival. They want to see the diminutive politicians, once feted globally, stand in a court of law charged with crimes against humanity.

They say that as the leader of Myanmar, she failed to take all necessary and reasonable steps within her power to prevent or repress the actions of military, or to submit the matter to any competent authority for investigation and prosecution. In fact Suu Kyi has not spoken about the events unfolding in the Rakhine State against the Rohingya since last September.

What we do know, thanks to countless eye witness statements and testimony is that the military burnt villages, gang-raped women and murdered babies. The legal team behind the application said: “The Australian Rohingyan community have requested legal advocates to petition the Australian Attorney-General, the Hon. Christian Porter, to bring a prosecution against Daw Aung San Suu Kyi I can reveal that buoyed by public response and support, the legal team has now requested the contents of an electronic bank of data being held by lawyers working for the tiny South African NGO Protect the Rohingya. What I do know is that the sworn affidavits of nearly 60 refugees living in camps on the Myanmar-Bangladesh border provided harrowing testimony about what they saw and experienced as they “Fled for their Lives” (the name of a report which was released in the British Parliament in London a few days ago).

I was in Cox’s Bazar and listened in excruciating detail some of the eye witness accounts and I hope Australia’s Attorney General does the same when the evidence is submitted. It is wrong that Suu Kyi should be allowed to leave the country after the ASEAN conference concludes but a clear message has now gone out to her and her glove-trotting generals. One day they will all have to account for their war crimes.

The legal action has already had an impact after Suu Kyi, scheduled to give a speech at Sydney’s Lowy Institute on Tuesday, has ducked out of the event which was also going to invite questions from the audience attending the think-tank’s event. In a statement released a few hours ago the organisers said she was “not feeling well.”

Myanmar government spokesman Zaw Htay told CNN News that Suu Kyi had felt “jet lagged and a bit weak” but was now fine and spending the afternoon with the Australian Myanmar community. When pressed as to whether the event would be rescheduled, Zaw Htay said in a text: “Schedule is very tight, it’s not suitable for her. We’re very sorry to cancel it.”

Last September Suu Kyi caused outrage among her critics and dismay to her defenders when she went on television to defend the regime and call “fake news” the stories emerging from refugees as they fled Myanmar and headed for the Bangladesh border. She also said she wasn’t “afraid of international scrutiny.” It now looks as though those words are beginning to haunt her.

Meanwhile, Dr Maung Zarni who spoke at the meeting in the British Parliament revealed that the Myanmar military, known colloquially as Tatmadaw or feudal army, is continuing with its campaign to starve the Rohingyas who remain inside Burma. Putting this in context, he says two thirds of the total population of Rohingya have been expelled since Oct 9, 2016  – about 800,000 in 12 months. This does not include the outflows since June and Oct 2012 bouts of organised violence against them.

As you read this article there are still hundreds of Rohingya pouring in to the Bangladesh camps because of the starvation policy on the other side of the border. While the temperatures are soaring in the region, refugees may get some comfort from knowing that Suu Kyi is also feeling the heat – but a different kind.

If she escapes prosecution in Australia because of diplomatic immunity she may want to consider her future once she is out of office. Like so many other leaders who thought they were above the law, she and her military junta should reflect on the fate of Reynaldo Bignone, the last Argentine dictator (1976-83). He was finally brought to justice and given multiple life sentences after being convicted of crimes against humanity — including the abduction of babies from alleged dissidents and the murder of dozens of purported subversives.

The reason I mention him now is that he died earlier this month, in prison, aged 90. General Bignone died just over a week after another retired Argentine general, Luciano Menendez, who received 14 prison terms and 12 life sentences, more than any other military leader of the dictatorship.

The evidence is now mounting against Suu Kyi and her military leaders proving to the world, at least, that they are the problem and not the solution for the Rohingya people.