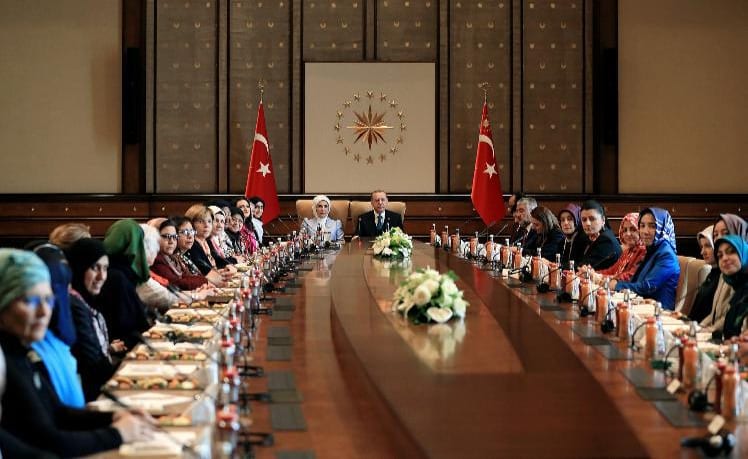 Day two of the convoy involved a very receptive and supportive meeting with Turkish President Erdogan – sitting at the top of the Picture near WTX News Special Correspondent Yvonne Ridley.

Day Two – from The Convoy of Conscience #IWD2018

I was quite torn today as the main group in the convoy headed off towards Adana while a few of us remained to go to the presidential palace to meet Turkey’s leader Recep Tayyip Erdoğan and his First Lady Ermine.

You can see from the images taken by those in the convoy that magnificent reception and rallies that were held as our all-women movement gained fame and momentum across Turkey and aroused considerable media interest elsewhere in the world.

Just a few weeks ago the idea of the convoy was being mooted by some Turkish NGOs in response to growing horror stories about the women trapped inside Syria’s prisons who wanted to shine a light on this dark corner of the very dark Assad regime.

Today I sat and listened as a Syrian mother-of-three gave testimony about how she had been arrested, along with her three children, and put inside one of Assad’s prisons. beaten and humiliated infant of her husband – also a prisoner – she talked about the brutality she endured.

Her tormentors, she revealed, often conducted their physical onslaught in full view of her children. Her husband did not survive prison but somehow she and her children did and she spoke quietly and with a determined dignity that she would spend her last breath trying to get justice for what happened.

Ermine Erdogan sat less than a couple of feet away from me and I saw her tear up and gently dab the corners of her eyes to stop the well of tears spilling on to her face. The President looked on grim-faced and pursed his lips, as men do, when they try and control their emotions. This testimony was powerful and compelling and it was incredibly brave for her to share her story with us.

Another equally strong and determined Syrian woman followed on. Dima, it emerged, is a lawyer now living in Istanbul and is clearly driven to get justice for her people. She told the distinguished gathering, including the South African Mandela women – as Raine Rose and her daughter-in-law Nodiyala are affectionately known – that women were being held without trial or charge inside the Syrian regime’s prisons.

This was, she said, not only illegal under international law but also under Syrian law.

Earlier in the meeting the President shared his views with us clearly: Assad was a war criminal and should be punished as such, he said through a translator. Obviously frustrated by the lack of action from the international community from the Muslim world as well as the West, Erdogan criticised those who supported Assad naming Iran, in particular.

Although he didn’t make any promises, you kind of got the feeling that Erdogan has been moved by the sincerity and determination of the women on board the Conscience Convoy and if he can lend his not inconsiderable weight to our movement I think he will.

Afterwards he stood and chatted with members of the convoy but I monopolised the time of Ermine Erdogan with my fellow Geordie, Newcastle City Councillor Anne Schofield. Sorry no selfies to show for it all – we were divested of our cameras before entering the rather grand room where we met Turkey’s No 1 couple.

There were a few photographers around so I’m hoping to upload their work later. As we left the palace our electronic equipment was returned and we indulged in a few selfie moments. Rayne Rose Mandela, her daughter-in-law Nodiyala – Nelson Mandela’s granddaughter from Eastern Cape – and myself stood and posed on the steps. Well it’s not everyday you get to meet a President … or the Mandela women!

From there we met members of the Turkish Government’s human rights committee and had lunch in the parliament. As we walked to lunch there was an amazing hand-painted mural which stretched out before us giving a pictorial history of Turkey, its landmarks natural and man-made and historic sites. I’ve tried to film it for you, hope you enjoy the scenery, I certainly did.

After lunch I was shown some twisted metal and the destruction caused by the first missile fired from a helicopter during the failed coup. The grim scene is right in the heart of the Turkish parliament and serves as a reminder to all, I suppose, about how fragile and hard won is democracy.