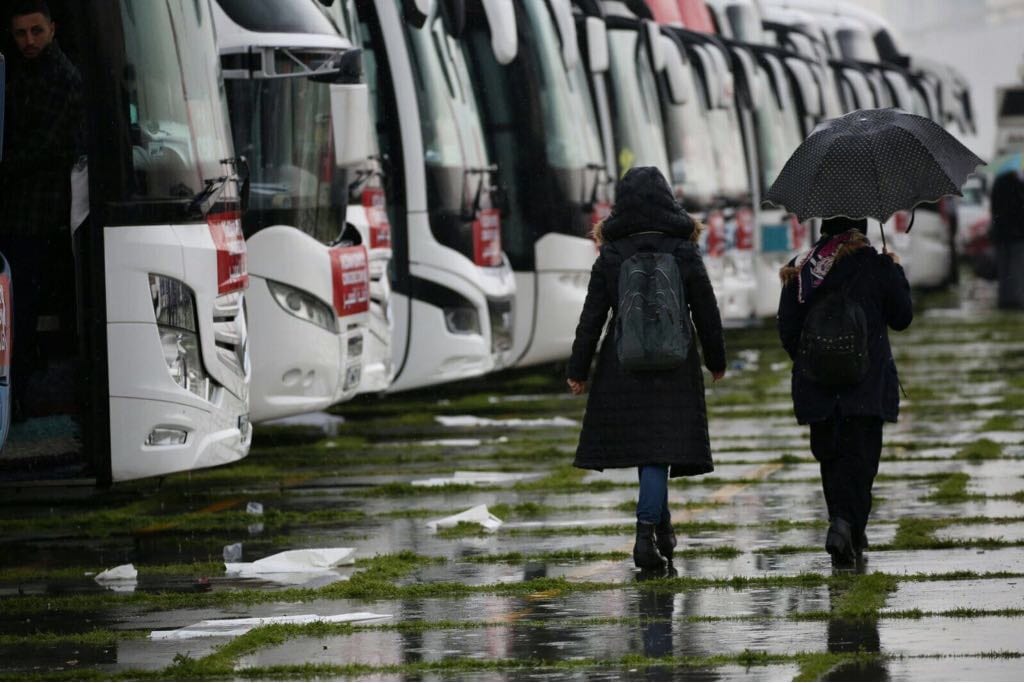 Dairy from Day 1 from the Convoy of Conscience led by Yvonne Ridley – We are coming for you Assed!!!!

When the idea of an all women convoy from Istanbul to the Syrian border was first mooted there was talk of around three buses being used to volunteers across Turkey to coincide with International Women’s Day.

Yesterday the dream became a reality but there were more than 60 buses and thousands of women from 55 different nations. Women had crossed continents including South America, Europe, Asia and the Far East as well as the Middle East, it was truly an incredible sight.

The downpour was also unbelievable and unrelenting but I heard not a single complaint about the weather. Nothing was going to dampen our determination or spirits.

As we pulled out of Istanbul there were cheers and cars tooting, it was a truly wonderful, uplifting sight. We were already on a high after several rousing speeches in Turkish, English and Arabic.

I was sat next to a sister from South Africa and across the aisle was another from Brazil. We were like the United Nations, so many different nationalities but the biggest cheers of the day came from the Bosnian women … more than 200 flew in from Sarajevo to join the Conscience Convoy.

The media were in full flight asking the usual questions: Can you make a difference? And I truly believe we can. One woman, Rosa Parks, ignited the American civil rights movements when she refused to give up her seat to a white man in her home town of Montgomery.

That single act of defiance is still causing ripples today. So what can thousands of us do when we come together? I imagine quite a bit. The reason for this Conscience Convoy is to shine a light on the dark underbelly of the prisons in the Assad regime where more than 6000 women and around 400 children are being held.

We can only conclude they’re being abused and tortured on an industrial scale because of the horrific stories emerging fromAssad’s dungeons. Our message to him is quite clear: Release our sisters now!

While I told one rally that we can hear our sisters’ cries, I also said let us make sure Assad hears our roar when we get to the Syrian Border. it was a message reinforced by Sajeela Kershi, a London comedian and writer, as we both spoke in a packed hall in Sakarya.

There are many ‘lionesses’ on our convoy and while Assad holds no fear for us he should heed our warning and will hear our roar when we reach the border on International Women’s Day. That’s a promise.

We’ve just reached Ankara now and most of us are sleeping in the beautiful and vast Veranda Mosque. We’ll pick up many more sisters on the convoy which is growing by the hour. Please follow our progress on WTF News and look out on Instagram, Twitter etc. for #ConscienceConvoy and for regular updates on the way.