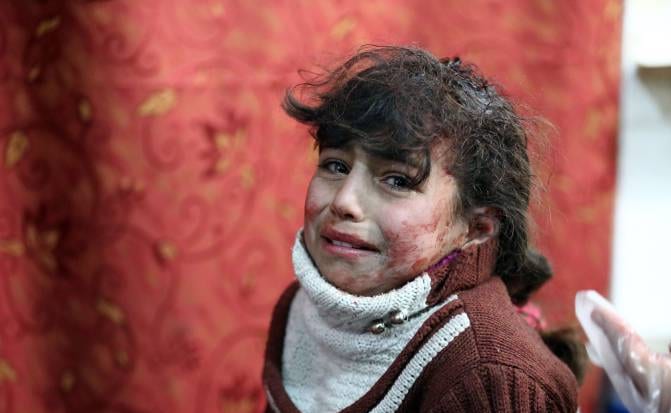 Yvonne Ridley & WTX News are taking part in an all-women Convoy to #Syria and we want you to join her in #Istanbul. Here’s why:

OK guys time to step aside and make way for the women – we have a convoy on the go and it’s bound for Syria to show some solidarity with the women brutalised by the regime there.

Sorry if I sound like a man-hating, rad-feminist but I am done with all of these useless, self-interested, self-promoting Middle East despots and dictators who trash human rights, commit war crimes and genocide while the rest of the largely male-dominated governments selling them weapons look the other way.

And can anyone tell me the purpose of the United Nations Security Council – another male-dominated cabal of male leaders who sit there beating their chests, making empty noises when they should be making peace.

As I write this, the world is actually watching a Srebrenica-style massacre unfold in eastern Ghouta and while this is happening news of another dark side to the brutality of the Syrian regime is also beginning to emerge; the imprisonment and torture of women. Enough is enough. It’s time for the men to step aside and let women move in.

The stories of rape and inhuman treatment in Syria’s prisons have now prompted a number of high-profile women to launch a global movement to send an all-female peace convoy to the Syrian border to shine a light on these war crimes. Despite being hidden away in the dungeons and prisons of the Assad regime, eyewitness accounts are beginning to emerge, providing details of the plight of thousands of women. They are, by all accounts, being tortured, raped and summarily executed.

Since the war in Syria began in March 2011, nearly 14,000 women have been arrested by the regime. Around half are still being held, along with more than 400 of their children. There are fears that the numbers are much higher, with rumours of hidden and ghost prisons across the country.

The UN Independent International Commission of Inquiry on Syria admitted recently that because of stigmatisation and trauma, few women or their families are prepared to lodge official complaints about the sexual violence to which have been subjected, or have witnessed. However, the inaction of the UN is also causing frustration among female peace activists, and now some have come together as the “Conscience Convoy for Women” in order to highlight the plight of their sisters and children imprisoned and tortured in Syria. I should declare an interest at this stage and say that I am honoured to be among the women behind this campaign.

I have previous form when it comes to challenging Syrian brutality. Years ago, I personally visited the Syrian Embassy in London on behalf of a distraught mother and her five children to highlight the plight of a ghost prisoner who was being held in a Damascus prison. All the family wanted was a few little crumbs of information of his wellbeing and a possible prison visit.

Rather than confirm his whereabouts, the regime was more interested in finding out who had told me about his plight and how I knew his prison number and how I was able to tell them the exact location of his cell. Ten years down the line it chills me to the bone to think that even women and children are now being subjected to “the treatment” dished out in President Bashar Al-Assad’s dungeons.

When the US was on good terms with the regime it used to send prisoners there to receive “the treatment” in order to gather intelligence on the never-ending War on Terror. Intelligence, by the way, which was almost certainly shared with Britain but the Westminster government would rather shell out millions in compensation and gagging orders than admit to that. Having written a book on the subject of torture and the futility of its utility, I feel sick just thinking about what his happening to the women and children incarcerated by this regime.

The all-women convoy leaves Istanbul March 6 and will wind its way over two days to the Turkish-Syrian border passing through major towns and cities collecting more women supporters en route until we arrive at our destination on International Women’s Day. Once there we will raise our banners, placards and voices on behalf of the women who are suffering in such a brutal way: torture, rape and summary execution are no joke. If there is any humanity left in the hearts of those running one of the most brutal regimes on earth, they will release all of the women and girls into our care at the border.

The convoy will be made up of women from around the world; women of faith and no faith, political activists, professionals, dozens of NGOs, medics, academics, housewives, lawyers, businesswomen, athletes, artists, social workers, teachers and politicians. It has become quite clear to all of us that we cannot rely on the male-dominated UN or its male-led, male dominated, chest-beating, knuckle-dragging misogynistic “Security Council” to stand up for thousands of voiceless Syrian women and girls, so we women on the convoy will do so instead; we will be their voice.

I have been told that some of the Syrian women were arrested or abducted during pregnancy and were forced to give birth behind bars; some were impregnated by their gaolers after being raped repeatedly. That’s what we know about the women in the official regime-run prisons; we have no verifiable information about those being held in the many anonymous buildings used as unofficial detention centres.

“The number of people who are kept in different buildings and facilities used as prisons is still unknown,” admits convoy organiser Fatima Zahraa Alaoui. “According to the last statistics issued by Syrian human rights organisations, though, the number of women detained by the Syrian regime between 2011 and 2017 stands at 13,581.” Of that number, she adds, more than 6,700 are still being held by the regime, including 417 children. “The Conscience Convoy will reach the Syrian border on World Women’s Day on 8 March to make a call to the world.”

Setting off from Istanbul, the Convoy will pass through Izmit, Sakarya, Ankara, Konya and Adana. Women are expected to be joining the group from within Turkey, while a global contingent will be taking part from the start. if you have the means to get to Istanbul then please, come and join us.

Meanwhile the UN has called for an immediate ceasefire on humanitarian grounds in eastern Ghouta, and has pleaded with coalition forces — including the pro-regime Iranian-backed militias and Russians — to stop their bombardments. Relief agencies have made similar appeals but have been ignored so far. Record numbers of locals have been killed in the past 48 hours and parallels are being drawn with the genocide that unfolded in Srebenica.

Women and children being brutalised behind closed doors; women, children and men being massacred in full view of the world’s media. It looks like business as usual for the Assad regime, but perhaps the women of the world can shame the Syrian President and his elite band of friends in Damascus into putting an end to this barbaric behaviour.

It’s time for women of the world to unite and step into the vacuum left behind by these brutes and so-called masters of the universe who’ve made such a hash of things whether they’re sitting in the UN Security Council or flouting the UN’s rules and regulations.

Anyone get any better suggestions? I thought so – now step aside and make way for our Convoy of Conscience. If you don’t want to join us on the Syrian border then at least wish us well on our mission. If you can’t follow us on twitter sign on to our Facebook page: https://www.facebook.com/ConscienceConvoy/?

And if you’re a man who has the good grace to step aside and let we women do our best why not dip in to your pockets and buy air tickets for some deserving females in your life and let them come and join us.

See you at the border, ladies!