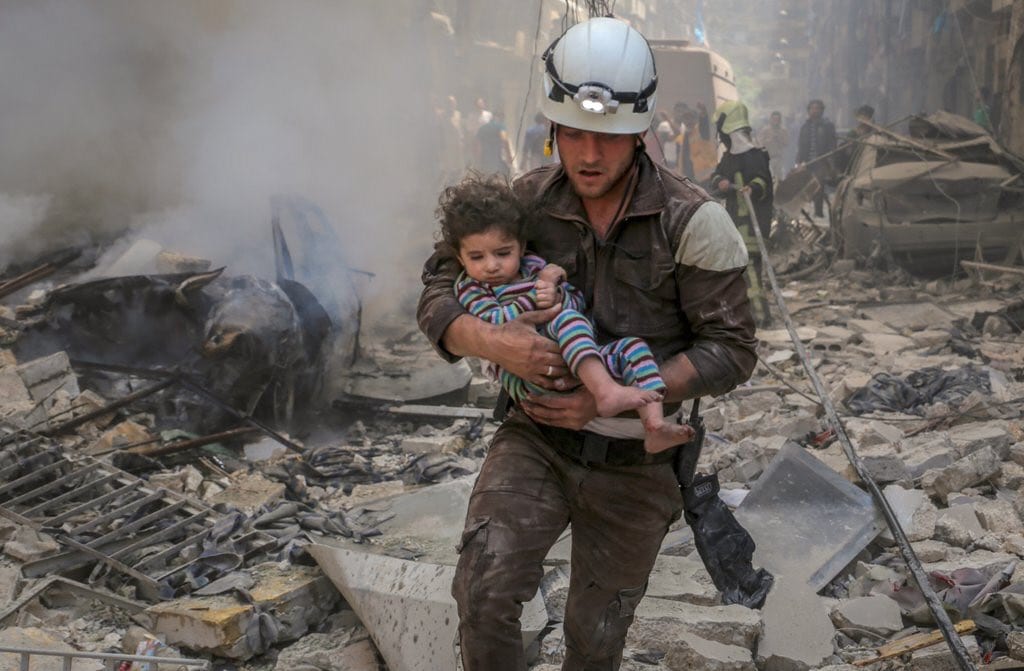 Images of the heroic White Helmets, officially known as Syria Civil Defence, always leave me breathless because of their unstinting humanity, courage and bravery.

They brought us news this week that dictator Bashar al-Assad’s military has dropped chemical weapons – once again – on his own people. The horrific moments were recorded the moment bombs filled with what appeared to be a highly flammable liquid, blitzed the rebel-held town of Hamouria within the besieged eastern Ghouta region.

Members of the white-hatted volunteer group operating in pockets of rebel-controlled Syria and the regime have experienced this all before. However, not content with dropping shells, missiles, chemical weapons and barrel bombs on the civilian population the Syrian regime and its allies also invest heavily in propaganda to discredit and rubbish these heroes.

The task of the SCD is simple and consists of urban search and rescue of Syrians who need to be medically evacuated or rescued from rubble. More than 160 have paid the ultimate price for their bravery and heroics. Yet, unbelievably, they’re now the target of a major campaign of disinformation peddled by supporters and paid stooges of the Assad regime and Russia’s powerful propaganda-spreading media.

Being trained, funded and given equipment by the West does not make them complicit in the shenanigans around Western foreign policy. Indeed as a volunteer group they would be crazy to turn their backs on any life-saving freebies in an area where there’s no other form of civil defence.

When you’re in the business of rescuing women, babies, children and toddlers I’d imagine you’d be grateful for any help received. And, to be truthful, if I was trapped in burning rubble I wouldn’t be asking the hand that helps me about whose side they’re on. I’d just grab it and be grateful.

Apparently there are around 3000 volunteer White Helmets who’ve rescued more than 80,000 people since they began keeping count which sadly makes them targets in “double tap” bombings by the Assad regime. Once bombs have dropped in civilian areas, often schools and hospitals, the White Helmets move in to rescue those buried under bricks and mortar. As they carry out their work they become targets themselves in Russian and arian-led airstrikes.

What few people realise is there are about 100 female volunteers as well. I take my hat off to them, one and all. And before you start sniping verbally at the White Helmets, having fallen for vile propaganda, ask yourself this: What would it take to make you run into a burning building in a state of collapse looking for women and children?