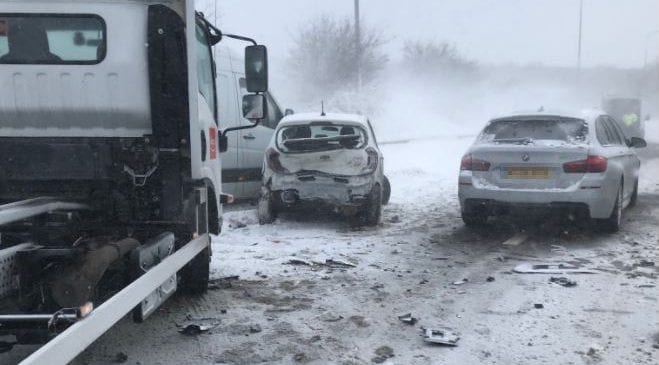 Breaking: Twenty people have been injured in a 16-vehicle motorway pile-up on the M66, near Manchester, around midday today.

The North West Ambulance Service described all 20 as ‘walking wounded patients’ after the smash on the M66 in near ‘white-out’ conditions.

RT @BBCNWT: A crash involving 16 vehicles, a fire in an emergency vehicle and severe weather conditions have caused major delays on the M62 and M66 https://t.co/g9iVEn6E0H pic.twitter.com/VuHQ5htsiT

Nobody was trapped in any of the vehicles involved, Greater Manchester Fire and Rescue Service said, and no one was taken to hospital.

The pile-up happened on the southbound side of the motorway between the Ramsbottom and Bury junctions.

Paramedics treated two people who stayed in their vehicles in the aftermath of the smash.

It is believed that there are 16 vehicles involved in the collision, including a bus and the motorway has been blocked in both directions.

A spokesman for North West Ambulance Service confirmed there were no reports of serious injuries. Images from the scene showed damage to cars and vans. An X43 Witchway bus – believed to have been involved in the crash – was used as a refuge and shelter for those involved.

There were 16 vehicles involved in the crash on the M66 and the road is now closed. Please avoid the area. We're working hard alongside @LancashireFRS @gmpolice and @NWAmbulance to make sure everyone is alright and open it back up. pic.twitter.com/XVWKhtHNJT

The beast from the East is causing havoc and driving conditions around the entire country are dangerous and drivers are cautioned to avoid any unnecessary journeys.

Related Items:featured, M66, Storm Emma, The Beast from the East